Captain Alph (キャプテン・アルフ) is one of three explorers in Pikmin 3. He serves as the engineer of the ship, the S.S. Drake, which his grandfather, also named Drake, designed. He is very kind and positive in character, and greatly respects Captain Charlie.

He has blue-colored hair similar to Captain Olimar's in shape, an average sized nose and freckles on his cheeks. Unlike certain characters, his eyes are always open, much like when other characters such as Olimar or Louie are surprised. He is by far the shortest of all the playable leaders. Like all other leaders, he wears a bulky space suit with a large life support system on his back, and a round helmet topped with a beacon. His suit's details are the same shade of blue as his hair.

He is kind, positive, and possibly a little absent-minded (based on an early conversation with Brittany, in which he forgets about retrieving the Cosmic Drive Key and saving the Captain). He shows both respect and concern for both his team-mates and the Pikmin. He is a skilled engineer, being able to use both the Data Glutton and the Folded Data Glutton to upgrade the Drake's communication range. According to one of Brittany's Voyage log entries, she had "never seen him so excited!" in regards to them retrieving the Data Glutton. He may also be considered quite talkative, as most of the Voyage Logs are written by him.

His personality seems to stay mostly the same between versions, with most of his dialogue retaining the same meaning even if changed.

Alph was born the fourteenth youngest to fifteen siblings. Growing up he spent a lot of time with his Grandfather Drake, who was also an engineer. Watching him work was what inspired him to become an engineer as well later in life. He also enjoys writing poems as a hobby, with two of his poems being readable in the North American release of the game in the form of Voyage Log entries (only one is readable in the European version, as the other was turned into a "normal" Voyage Log).

At the start of Pikmin 3, the S.S. Drake crashes into PNF-404, leaving the trio separated. Alph lands in the Tropical Wilds, alongside the S.S. Drake. There he meets Red Pikmin, and with their help is able to recover both his KopPad and the S.S. Drake. From then on he must find and rescue his other two crew members while also collecting fruit and tracking down the Cosmic Drive Key.

Alph waking up in a body of water after being ejected from the ship.

A screenshot of Alph.

Alph using the Red Pikmin to salvage the Onion.

Alph encountering the Red Pikmin for the first time.

Alph watching Scornets fly past him.

Alph reuniting with the S.S. Drake.

An artwork of Alph and some Pikmin that are about to be ambushed by a Red Bulborb. 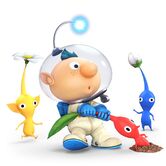 Alph walking down the pathway from the boss arena in the Twilight River.

Alph walking down a pathway from the boss arena in the Twilight River.

A Nintendo World NYC visitor posing with a statue of Alph