Anode Beetles (エレキムシ) are small black beetles with four yellow spots found in Pikmin 2. They are named 'anode' due to the fact that they produce electrical currents. These creatures are blissfully unaware of Pikmin, and if one is found alone, it is harmless. But if there is a partner nearby, the two can produce an electrical barrier between them, making any nearby Pikmin subject to electrocution. As such, Anode Beetles are always found in groups of 2 or more. Simple swarming will not harm one, as it has a protective shell, similar to the Flint Beetles. To harm it, one must throw a Pikmin on top of it to flip it over, then proceed to swarm it. Purple Pikmin can cause them to flip over even if not directly hit.

"This specimen is representative of an insect hybrid that uses electricity in addition to glycogen for its energy. Although difficult to confirm due to their microscopic size, tiny hairs on the creature's legs cause the friction that generates the electrical charge. The electrical charge is processed by the creature's internal machina battery structure, and then stored as a deus electrifical field. As this field reaches critical levels, surplus electricity is emitted, resulting in a low voltage current that is transmitted between specimens. It can shock other creatures in the immediate vicinity. Considering this process, it can be surmised that the largest impetus to pack behavior is not so much for synergic effect of producing as a pack as it is to take advantage of this most effective means of group preservation."

"Drain the electrical charge before boiling. Although it is possible to eat an anode beetle while it is charged, doing so may result in an unpleasant tingling sensation."

"Zapping baddies communicate with each other by sending electric charges over the air. The safest way to attack an Anode Beetle is to use electricity-resistant yellow Pikmin. A direct hit from the air will flip one of the bugs, leaving its vulnerable underbelly exposed."

Since this enemy can kill any type of Pikmin except for Yellow Pikmin, it is advised to use Yellows. Simply throw a Yellow Pikmin onto it, and proceed to swarm it. A group of 20 or more Yellows can kill it in one cycle. Alternatively, one could use other Pikmin types, but must be careful, as electrocution is a serious threat. Purple Pikmin can flip the beetles even if not directly thrown on top of the beetle. Bulbmin are also useful in caves such as the Submerged Castle.

Unless they are flipped over, the Anode Beetle is not harmed by the rocks of Armored Cannon Larvae and Decorated Cannon Beetles, Bomb Rocks, Gatling Groinks, or the Waterwraith. 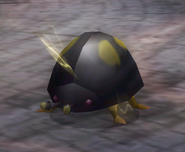 An Anode Beetle beginning to discharge.

Two Anode Beetles discharging electricity between each other.
Add a photo to this gallery
Retrieved from "https://pikmin.fandom.com/wiki/Anode_Beetle?oldid=128138"
Community content is available under CC-BY-SA unless otherwise noted.