The Arachnorb family is a species of enemies in the Pikmin games which resemble giant spiders, although are in fact insects. The first member of the family that was introduced is the Beady Long Legs, as an official mini-boss in the first game; it is found just once in the game excluding Challenge Mode and has its own music. The Man-at-Legs and Raging Long Legs made their debut in Pikmin 2, and the Shaggy Long Legs and Baldy Long Legs were discovered in Pikmin 3.  The name is derived from daddy longlegs, and the family name itself is derived from arachnid and orb. 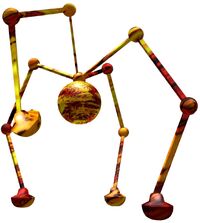 The Beady Long Legs first appears as a boss in Pikmin, and reappears in Pikmin 2 as a more common boss, in the main game and Challenge Mode. The only attack it has is stomping around, but its large feet make this more dangerous than it sounds. Its body is its primary weak point; defeating it is easiest with a squadron of 20-25 Yellow Pikmin (in Pikmin 1, at least,) because they can be thrown higher, and it can squash a large army easily. In Pikmin 2, however, it has a larger leg span, meaning Yellow Pikmin can be used, but so can other Pikmin as well. When defeated, it instantly disintegrates into dust, releasing the contents from its orb-like torso.

The Man-at-Legs first appeared as boss of the Subterranean Complex in Pikmin 2. Unlike the rest of the Arachnorbs, it is a biomechanical creature with very spindly feet that can't squash Pikmin, making its battle strategy different. It moves around quickly, and stops only to use its blaster-like weapon to attack when it has been agitated with attacks. It has its flaws, though; there is a visible laser it uses to target the Pikmin, making it obvious where it's going to shoot. These enemies are found in rusted metal arenas that have barriers and obstacles that can be used as shields against the blasts.

The best way to defeat it is to run for cover when it begins firing, attack when it lowers its body, and hide again when it shakes the Pikmin off. Another great way to defeat this beast is to take a large mob of Purple Pikmin, and while it lays dormant in the ground, pummel it with all of them by throwing them; this should lower its health substantially if done correctly. When it dies, it explodes spectacularly, quite differently from its relatives. As a side note, this enemy cannot be petrified while it is dormant. 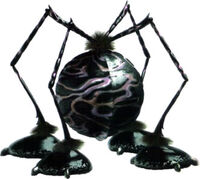 Raging Long Legs is a boss in Pikmin 2. It bears a resemblance to the Beady Long Legs in overall body structure, but has bigger, hairier feet with toes, a much larger body, is shiny and black with purple bands, and moves more slowly. Like the Man-at-Legs (but with stomping instead), if it is harmed enough that it becomes agitated, it shakes any attacking Pikmin off and starts stomping madly. This is extremely dangerous since its feet are very large and Pikmin take a little time to get up after they are shaken off. Its body is so large, however, that any kind of Pikmin can be thrown without waiting, and dodging it should be rather trivial, so it isn't hard to defeat as long as Pikmin are called back before it rages. It dies in the same manner as the Beady Long Legs, ejecting its possessions from its body and crumbling into dust. If this creature does not have any treasure to drop, it will instead drop thirty Mitites. 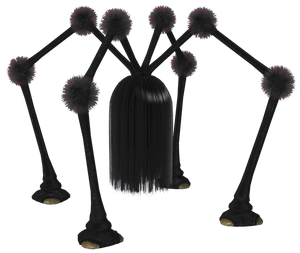 The Shaggy Long Legs is a Mini-boss in Pikmin 3 with a general body structure similar to that of the Beady Long Legs, only black like the Raging Long Legs. It is unique in that it has hair covering its joints, feet, and body. The hair on the spherical body is very long to the point that it looks ovular at first glance. The hair and overall body color varies depending on the area it is found, and can also spawn without any hair on both the feet and spherical body. In tropical areas,the hairs are dark purple,while the overall body will always be black. In cold winter areas, the hairs will be white, and the overall body will be black. When it spawns without hair, the spherical body is completely exposed, revealing spots of whatever color it is. The tell-tale opening possessed by Arachnorbs is also exposed, only slightly opened and horizontal, while other Arachnorb's openings are completely closed shut and vertical. It's opening is also marked by two "lips". These lips are yellow-green in tropical areas and red in winter areas. 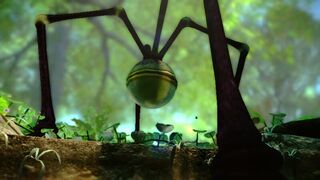 The Baldy Long Legs is a challenge mode and Bingo Battle mode exclusive enemy to Pikmin 3. Like its hairy counterpart, it also considered a Mini-boss, however, due to never appearing in Story Mode it does not play the remixed Pikmin 2 boss theme. It is the only Arachnorb who never stops to rest, save to shake off Pikmin. Unlike Shaggy Long Legs, it doesn't have hair on its joints to hit.

Although simpler to defeat than the Shaggy Long Legs, it's lack of resting and constant roaming make it a little harder.