The Armored Cannon Beetle (フタクチドックリ) is a boss in Pikmin. The beetle is first discovered during Olimar's first visit to the Pikmin Planet and is seen again in Pikmin 2 and in Pikmin 3, although only the larval stage is present in those games. It is a huge, black, shiny beetle with a thick, rounded shell of armor, and a blowhole above its head. It attacks by inhaling through this blowhole and subsequently firing a rolling rock from its mouth that travels in a straight path, which crushes any Pikmin in its wake.

This enemy appears twice in the game: once in The Forest of Hope, where one is guarding the Radiation Canopy, and once The Distant Spring, where one has ingested the Bowsprit. As a side-note, Olimar can destroy the rocks by punching them; however, this does not work with the rock-shooting Lithopods in Pikmin 2.

"This creature spits out massive rocks and boasts an impenetrable shell that repels all Pikmin attacks. Just before spitting out a boulder, it sucks in large breaths of air... Perhaps its air hole will provide a clue to it's weakness."

"This member of the lithopod family migrated to the area during a global climate shift in the atmosphere within the last century. The continental breed of this beast, known as the Greater Lithopod, had the ability to compress inhaled air in a bladder and use the pressure to expel partially digested fragments of stone. This migrant lithopod has developed a stronger carapace then its relatives."

"This migrant lithopod has developed a stronger carapace than its relatives."

The way the Armored Cannon Beetle can be defeated is by clogging the blowhole during air intake (Pikmin are impervious to harm when inhaled). This causes the beetle's internal temperature to rise dramatically, and in response the beetle will expose its burning abdomen underneath the armor to vent. The exposed abdomen leaves the Armored Cannon Beetle vulnerable to attack. However, it will quickly unclog its blowhole, shield its backside, and continue its attack after excess heat has been drained. However, if Olimar brings around 30-50 Red Pikmin and throws quickly, he can kill it on the first or second try. After closing its back up, your Pikmin are knocked down and the Armored Cannon Beetle shoots a boulder out of its cannon that rolls until it hits a wall. Make sure you call your Pikmin quickly or they will be crushed. Despite the heat radiating from its inner abdomen, you do not need Red Pikmin to attack it.

You don't actually need to fight the one in the Forest of Hope in order to collect the Radiation Canopy. A good strategy would be to enter its arena with 51 Pikmin; when it charges up, throw one Pikmin to clog its blowhole and then send the remaining 50 to start carrying the canopy back to base. Due to the amount of time it takes to dislodge a Pikmin and reorient itself, you shouldn't need to repeat this process more than once before the canopy is out of its range. 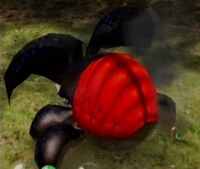 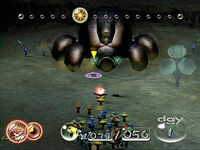 This is an Armored Cannon Beetle as shown in what appears to be the beta version of Pikmin. Notice that it's cannon is larger and more defined than in the final version. 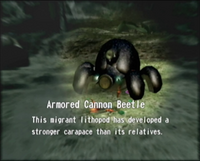 An Armored Cannon Beetle in the Creature Montage. 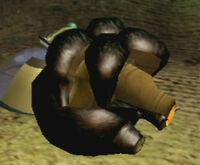 The corpse of an Armoured Cannon Beetle (Located in The Distant Spring) after it's defeat
Add a photo to this gallery
Retrieved from "https://pikmin.fandom.com/wiki/Armored_Cannon_Beetle?oldid=130015"
Community content is available under CC-BY-SA unless otherwise noted.