Like the adults, they attack by shooting boulders from their snouts, and have a blowhole on the top of their head, but it is either non-functional or not as powerful, so Pikmin cannot become stuck in it like with the fully grown beetles. Because Cannon Larvae lack the thick exoskeletal armor of the adult beetles, these enemies are vulnerable all over their body, but can buck Pikmin off when attacked. They can be manipulated into destroying other creatures by making them spit boulders at a Captain when he is beside or behind an enemy. Moving out of the way before the rock hits him, the rock will hit the enemy that was behind him. The boulders that are shot out cannot be petrified. They can, however, be destroyed by landing a Purple Pikmin on top of one.

In Pikmin 3, the boulders shot from them realistically roll down hills and slopes, and can even change direction if the ground allows for it.

"This specimen is a lithopod larva. This expedition was unable to confirm the existence of any mature lithopods, leading to concerns that the species was extinct on this planet, but the discovery of the creature in larval form eased such concerns. Lithopods, like flint beetles, use internal metabacteria to aid chemical digestion. These metabacteria can only survive in certain environments, such as within the body of certain insects, so lithopod larvae do not contain any metabacteria immediately after hatching. Larvae feed on partially digested ore regurgitated by mature lithopods, ensuring the larvae obtain metabacteria they would not normally have acquired."

"Carefully remove every grain of sand, peel back the exoskeleton, and slurp heartily!"

"Slow but mighty, Armored Cannon Beetle Larvae can make a good day into a bad one with one roll of a boulder. When one of the creatures sends a rock attack your way, use the C stick to have your Pikmin move out of the boulder's path as a tight unit, then throw soldiers onto the creature's back."

The Armored Cannon Larva's projectiles connot damage Rock Pikmin, but they will incapacitate them for a short time. When you attack one of these enemies, do so with a fairly large squad of Rock Pikmin. Flank the creature, then attack by throwing each of your Rock Pikmin for maximum damage."

If enough Pikmin are available, it should be swarmed, and it should die before it can harm any Pikmin. If there aren't enough to do this or there are other factors that make this strategy ineffective, Pikmin should be thrown onto it, preferably from behind. If the beetle bucks, the Pikmin should be called back as quickly as possible, and the steps repeated. Another strategy is to throw Purple Pikmin on it, stunning it if its above ground. It is a more effective strategy, but if no purple Pikmin are available and/or they should not be risked, the first strategy will work fine.

It should be punched until it is about to buck, then the player should run away, and then return to finish the assault. If there are idle Pikmin nearby, the cannon beetle's focus should be kept away from them. If there are two or more larvae, it is possible to make them kill each other with their boulders.

Approaching the creature with Rock Pikmin will work best, as they are immune to its crushing boulders. When it emerges, it's best to throw the Rocks quickly onto it. 20 direct hits will kill the creature. If no Rock Pikmin are available, then a large army of preferablyRed Pikmin can be used to defeat the Cannon Beetle in a very short time by swarming it just after it emerges from the ground. If executed properly, the creature won't be able to attack even once. 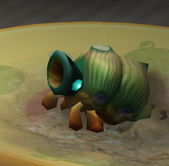 An Armored Cannon Larva in Pikmin 3.