Pikmin
Register
Don't have an account?
Sign In
Advertisement
in: Mawdads, Enemies, Garden of Hope,
and 7 more

The Armored Mawdad (ヨロヒイモムカデ, Yorohī Momukade) is a boss enemy from Pikmin 3, and is the first major boss encountered in story mode, found in the Garden of Hope. It is a massive, centipede-like beast with a multitude of small gecko-like legs, a large head, yellow eyes, a bluish-green underbelly, a gaping mouth, and large curved mandibles. Most of its body is covered in segments of crystalline carapace that must be broken by Rock Pikmin.

"This extra-large creature can be found in hollowed-out trees. Its exoskeleton is made of crystal."

"The Armored Mawdad is located in the Garden of Hope. This creature is protected by the segmented armor covering its back. The Armored Mawdad uses its massive pincers to trap and devour any victims caught in its path.

The Armored Mawdad is surprisingly agile, so it's important to keep your squad moving. Use Rock Pikmin to break through the creature's armor, then use Red Pikmin to latch onto the exposed flesh."

The Armored Mawdad is almost constantly in motion, crawling around the stage in erratic patterns. When it gets a clear view of a group of Pikmin or the current leader, it will charge and trap the Pikmin with its massive mandibles. During this time, it will commence eating Pikmin (5 at a time) with its wide tongue, during which it will stop moving, allowing players an oppritunity to throw Rock Pikmin at its crystalline armor to break it away. This will aggravate the boss and save the trapped Pikmin. The now-exposed flesh can be freely attacked with any other available Pikmin types.

Once it has started to lose armor, it will crawl faster and begin to evade the Pikmin by crawling up the walls of the arena. It will then crawl around off-screen for a moment before coming back down to charge at the Pikmin once again. When it is out of view, the player can still be made wary of its location by either looking at the gamepad's map, or by paying attention to where small chips of wood are falling from the ceiling.

If the player can land a successful hit on its mandibles, they will break, rendering it harder for the Mawdad to capture and eat Pikmin. If a Pikmin latches onto one of its eyes, the Mawdad will become extremely agitated and aimlessly careen through the arena until the Pikmin is thrown off, and even ramming its head into walls in an attempt to shake the Pikmin off.

Warning: it is advised that this strategy is only attempted by experienced players.

A much simpler way to defeat the Mawdad quicker and with little trouble is to immediately run to the side as soon as the battle begins. The boss will charge foward only to catch nothing, and will then stop for a few seconds before crawling around again. During this time, quickly throw as many Rock Pikmin as you can at the tip of its tail, and it should easily break off. This will aggrivate the Mawdad and make it climb up the wall. When it comes back down to charge, move out of the way and quickly run behind it. Before it starts moving again, swarm all of your Red Pikmin on its tail. If enough grab onto its tail, the boss' health will rapidly drain and it can be killed with one hit from a Rock Pikmin as soon as it descends from the wall.

This is much easier in Mission Mode, as the Dodge Whistle powerup is in use. However, it is still easily doable without said powerup.

This strategy is most useful during speedruns, as it can be used to defeat the boss in under half a minute.

A frontal view of the beta Mawdad with its facial armor broken off.

An Armored Mawdad coming down to attack Alph, Brittany, and their Pikmin.

The Mawdad rears up to intimidate Alph and Brittany before battle.

Once the mandibles have been broken, it will be easier for Pikmin to escape from the Mawdad's gaping mouth. 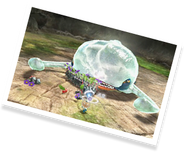 The Mawdad in a photo frame from the Japanese site.

After defeat, the Mawdad coughs up the Fire-Breathing Feast and a Cellphone, which unlocks the next area where Charlie is held.

The Armored Mawdad's corpse being dragged by Pikmin.

The Armored Mawdad in its death animation, breaking any remaining carapace pieces.
Community content is available under CC-BY-SA unless otherwise noted.
Advertisement