Beady Long Legs (ダマグモ damagumo) is a boss in the first two Pikmin games. The only way it can harm Pikmin is by stomping around, which it does more quickly when damaged and its multiple feet crush any Pikmin they land on. To defeat it, one must throw Pikmin at its orb-like torso. Yellow Pikmin are recommended for this because its body is inconveniently high. Swarming the feet will slow down the movement of the foot but is highly dangerous because the Pikmin may be crushed. When defeated, it crumbles into dust that disintegrates after its belongings explode from its torso. The creature is in both the main game and Challenge Mode of both games in the series. In the first Pikmin game it stomps faster than in Pikmin 2, and its feet stick into the ground. In Pikmin 2, it's noticeably slower and its feet don't stick into the ground.

In Pikmin 2, the Beady Long Legs has a more brownish tone to its body, while in the first one it is just yellow. Appearances in the second game are more common, and have much less health, slower movements and different cries. It first appears as a miniboss in Pikmin, where it is found in The Forest Navel, protecting the Guard Satellite ship part, and again in The Final Trial in Challenge Mode. In Pikmin 2, one appears on the fifth sublevel of the Citadel of Spiders, where it drops a key that unlocks Challenge Mode, one on the fourteenth sublevel of the Hole of Heroes, one in the Twilight Garden in Challenge Mode, and one that can be found on seemingly random days in front of the landing site in the Perplexing Pool after day 30. Patterns have been detected (most notably every palindrome day and every 3 days), but this is not true in all cases. If you walk on a small, white circle on the ground, it will fall out of the sky. Also, on the same day, Dwarf Bulbears and a Spotty Bulbear come to the same area, so take care of the Beady Long Legs quickly. Killing it here yields twenty small "1" pellets.

"This creature is so large, it would tower over the Dolphin. All the Pikmin can do is cling to its feet and try to slow it down. Its large round torso is its sole weak point - since yellow Pikmin fly highest, they should be most effective against it."

"Although this creature is commonly associated with spiders, it is actually the result of a seperate evolutionary line of insectoid creatures. Since the spherical body section supported by the creature's legs carries most of its internal organs, there appear to be no other features that would correspond to a head or abdomen."

"The name says it all. Since the Beady long Legs has such long legs, you'll need yellows to reach its body when its standing up straight. Steer clear of its legs when it stomps and hit it with purples when it dips."

In the first Pikmin game, the best way of going about beating the Beady Long Legs is to bring about 20 Yellow Pikmin. Small armies of Pikmin work best, as the Beady Long Legs is less likely to stomp on a smaller group. Also remember to bring a minimum of 20 Red Pikmin in order to carry the Guard Satellite through the fire geysers. Dismiss these Red Pikmin outside the arena, and take your Yellow Pikmin inside. Be cautious when stepping into the arena, as the Beady Long Legs may fall onto you or your Pikmin. Once the Beady Long Legs appears, simply stay under its spherical abdomen, and continuously throw your Yellow Pikmin onto it. The more Pikmin attached to its abdomen makes it weigh down, making it easier to throw other types of Pikmin onto its body. Eventually it will start shaking some of your Pikmin off. When it shakes Pikmin to the ground, make sure to call them and throw them back on to the attacking point. In time, it will finally die and drop the Guard Satellite, which you can use Red Pikmin to carry back to the S.S. Dolphin.

The strategy for beating the Beady Long Legs remains the same in most aspects. However, the Beady Long Legs is a lot slower than its Pikmin variation. It also doesn't weigh down with more Pikmin, and always shakes off all Pikmin when it shakes as opposed to only some. A squadron of 20 Yellow Pikmin is preferable, but in the Hole of Heroes, there's a level where you have to use Blue Pikmin due to the wet environment. In this case you must wait for the Beady Long Legs to lean downwards after it is done with a walk cycle. When it leans downward, it can be reached by Pikmin other than Yellow Pikmin. But if he is on land you can still use your yellows as long as he is in a safe place. In the Citadel of Spiders can you also throw purples on his feet. It does a good deal of damage, but it is risky as they can be squashed; so the best time to do this is when he is roaring. This works also on the Raging Long Legs but is riskier because his feet are harder to avoid. It is also not worth it because it only does a little bit of damage.

In Pikmin, there is a rare and dangerous glitch that causes Beady Long Legs to leave its arena. This glitch is most likely to happen when you leave the arena without killing it. Pikmin and/or Olimar have to be left at the gate to the small arena. The creature will then try to attack you, possibly leaving the arena. Once outside of the barriers, it will continue to pursue you. If you now run to the island where the Libra is, the enemy may fall into the abyss below, causing the game to crash (the game will also crash if you do not kill it after it leaves the arena after a certain amount of time).

If one wishes to attempt this glitch, the best place to do it without receiving any consequences is The Final Trial in challenge mode. Go to the arena in the back of the level and try this glitch on the Beady Long Legs in the arena.

In Pikmin 2, this is fixed. An enemy that has fallen into the abyss dies, and anything it might have been holding reappears above the ground near the place it fell.

This is the music that plays when Olimar battles Beady Long Legs in Pikmin. In Pikmin 2 this is replaced by the standard boss theme. 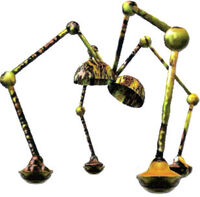 Artwork from Pikmin 2 of the Beady Long Legs. 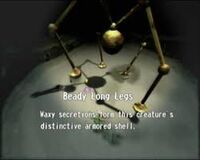 A Beady Long Legs as it first lands in a cave. 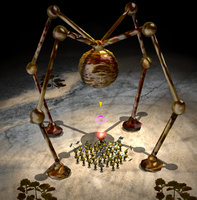 A high quality screenshot of the Beady Long Legs in Pikmin 2. 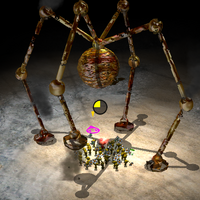 The Beady Long Legs begins to crumble and emit smoke as it becomes weaker. 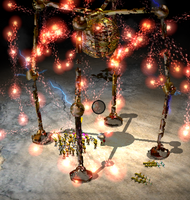 The Beady Longs Legs exploding when it runs out of health. 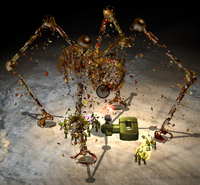 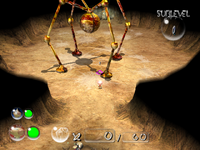 A Beady Long Legs in an unused cave for enemy testing. 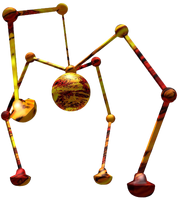 A transparent png of the Beady Long Legs
Community content is available under CC-BY-SA unless otherwise noted.
Advertisement