Like in Pikmin 2, Pikmin 3 has a 2-Player Battle mode called Bingo Battle. The overall rules have changed, but many of the same concepts return. The mode can be played in 1 vs 1 or 2 vs 2.  Enemies in each arena change each time you play.

There are 12 stages to choose from in Bingo Battle.

Of these stages, there are 3 different layouts for each stage.

One player will play as Alph, while the other will play as Captain Olimar. In a 2 vs 2 match, the first two players are Alph and Brittany or Charlie, while the second two are Olimar and Louie. On the bottom of each player's screen, there will be a 4x4 bingo card lined with random objects, which range from enemies to fruits to treasures. The player that collects all of the objects in a row, (horizontal, vertical, or diagonal) will win, similar to bingo. Players can also enable each team to have a victory macaroon. Each player's onion will have a macaroon with a flag by it. If this macaroon is stolen by the opposing player, that player will automatically win similar to taking the opposing teams marble in 2 player battle in Pikmin 2.

Unlike in Pikmin 2, each player can have any type of Pikmin. The only difference is that the color of the Pikmin's leaves, buds, or flowers will correspond with the player. (Player 1: Blue. Player 2: Pink). Each maps type of Pikmin will change depending on the map layout, but there will only ever be two types of Pikmin on the map.

Similar to Pikmin 2, this game mode involves 2 Players using the Wii Remote Plus and Nunchuck (or possibly a pro controller). Most standard controls apply, but down on the D-Pad now activates items. The Gamepad serves as a map and can show where either player is.

Once again, the player can get items by carrying Cherries back to the assigned onion. If you get a Golden Cherry, you will immediately get five items in storage. These are the items that can be obtained: 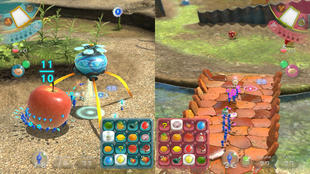 The blue team placing an Insect Condo in the Onion 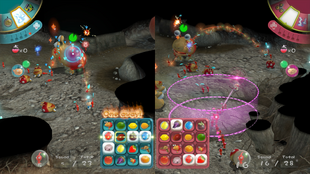 The blue team is one object away to winning! 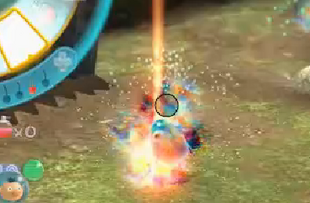 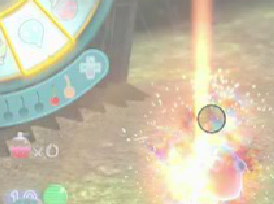 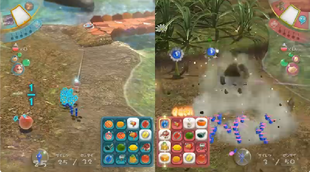 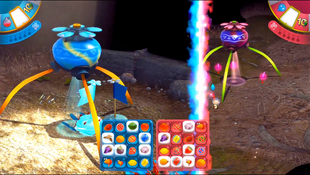