Blowhogs are somewhat plump creatures. They can be seen on land or in the air. All blowhogs have a long snout that can blast fire, wind, or water depending on the species. Different blowhogs can maneuver on land or in the air, land blowhogs resembling that of plump, snorting mammals, and aerial blowhogs resembling that of blowfish. Blowhogs in Pikmin Adventure are mechanical and do not appear to be based on an animal.

The Fiery Blowhog is a cousin of the Watery Blowhog which has a red snout and spits fire. Fiery Blowhogs are common enemies in Pikmin 2, but are only found in The Forest Navel in Pikmin. When agitated, Fiery Blowhogs will buck, sending any attacking Pikmin flying. These beasts are also often found near water, a serious hazard to any Pikmin knocked into it. In Pikmin, it is very difficult to save the Pikmin from fire, so Red Pikmin are recommended. Blowing the whistle in the area the fire is spewed can also cancel out the attack and save the Pikmin caught in the flames instantly. If you can throw very fast, purples will work due to the fact that they stun upon impact. It is recommended that you defeat it with a captain when you have the Scorch Guard. These returned in HD to Pikmin 3, found all throughout story mode. This is ironic because the Watery Blowhog is only found once. It makes a reappearance in Hey! Pikmin, as the sixth boss of the game in Sweltering Parchlands.

Watery Blowhogs look similar to Fiery Blowhogs, except that their snouts are tipped with blue instead of red. They also buck any attacking Pikmin off. Instead of fire, they spit out water that gets stuck on the Pikmin's heads (excluding Blue Pikmin, of course). That being said, the best Pikmin to use against them would be Blues. Purple Pikmin can also work extremely well when thrown, as they have a chance of stunning the Blowhog, preventing it from attacking. Blowing the whistle in the area the water is spewed can also cancel out the attack and save the Pikmin caught in the spray instantly. You can also defeat it with a captain. 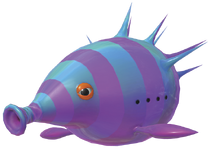 The Puffy Blowhog is an enemy in all three Pikmin games. It is more recognized over the two airborne Blowhogs. It resembles the Withering Blowhog, but is larger, with purple and blue stripes, and spines that protrude from its backside. If looked at closely, it has a row of black spots on its side that look like tiny windows, making it somewhat resemble a dirigible. Its breath is stronger than that of the Withering Blowhog, having a more largely affected area, and being able to send Pikmin flying from greater distances. It will blow the flowers off of Flower Pikmin in Pikmin, but in Pikmin 2 they lose this ability (being taken by the Withering Blowhog). The strategy to take down this beast is simple: quickly toss Pikmin onto it while it's in the air (one Purple Pikmin will also work) to weigh it down and ground it, then swarm it or pound it with purples. In Pikmin 3, they now have the ability to puff up to shake off Pikmin.

The Withering Blowhog is an enemy in Pikmin 2. It is a smaller variation of the Puffy Blowhog, and it is a shade of deep orange with a white underbelly. When Pikmin are nearby, the Withering Blowhog will move into position and attack by blasting the floor with a large gust of air. Unlike the Puffy Blowhog, the Withering Blowhog does not merely blow Pikmin around, but also deflowers them in the process, hence the name. This often makes the enemy a big pain, as it can be deadly in some areas, such as near any type of hazard, and makes your Pikmin less effective if its attacks hit them. To attack it, the Pikmin must be thrown onto it (it doesn't matter where), or have at least one Purple Pikmin latch onto it. If done correctly, the Blowhog will be grounded for a few seconds, utterly helpless. Unlike its larger cousin, the Withering Blowhog has little health.

Blowhogs in Pikmin Adventure are very different from the ones in the main Pikmin series. They are mechanical with spherical bodies, and instead of spitting out liquids or air, they have a retractable spike that they shoots out or use to charge at Captain Olimar and the Pikmin. Also, rather than walking or running, the Blowhog flys and it also has a sphere shape body. They are rare enemies.

Retrieved from "https://pikmin.fandom.com/wiki/Blowhog?oldid=128170"
Community content is available under CC-BY-SA unless otherwise noted.