Bomb Rocks are explosive rocks in the Pikmin games. They are used as an explosive force or weapon in the games they are found in, both for the player and by certain enemies.

In Pikmin, the bomb rocks are much smaller than in future games. They can be carried only by Yellow Pikmin, where their main purpose is to destroy Reinforced Walls. They can also be used to defeat enemies, and are particularly useful for doing so with bosses. When an enemy eats a Pikmin that is holding a bomb rock, it explodes inside the enemy, which will harm or even kill it. They are usually found inside tin cans, pipes, or large animal skulls. If there are idle Pikmin near the spot a Yellow Pikmin leaves its bomb rock for detonation, the thrown Yellow Pikmin will "call" these idle ones to him as he runs back to Olimar. The idle Pikmin will join Olimar, exactly as if the captain himself had whistled them.

In Pikmin 2, they are much larger and cannot be carried by Pikmin, but can be detonated by attacking them with captains or Pikmin. While underground, bomb rocks may fall from the ceiling, exploding shortly after reaching the ground. In certain caves, you can trick nearby Emperor Bulblaxes into swallowing them, which will stun the beast and deal considerable damage. Bomb rocks are also produced by Careening Dirigibugs. Volatile Dweevils carry bomb rocks on their backs, presumably for protection, even though they themselves are killed in the blast.  Bomb rocks can even be petrified, so do that if you are in a pinch, but keep in mind that they will not release nectar or spray like many beasts do if killed in that state. In the 2-player battle stage Hostile Territory, bomb rocks can be picked up and thrown by your captain, which you can use to defeat enemies, or deal a serious blow to your opponent's Pikmin count. To perform this action, run into a bomb rock and then press A again to throw it, or B to drop it.

In Pikmin 3, Bomb Rocks are in between the sizes of Pikmin and Pikmin 2. In this game, all five (seven in Mission Mode) types of Pikmin are capable of carrying them, but the mechanics with which they release them are very different. Though Pikmin may once again wield the explosives, they will now instantly drop the Bomb Rocks upon being thrown, as opposed to them waiting to be thrown at a wall or an enemy, as they do in the first game. This makes them harder to be transported. Pikmin will also never throw bomb rocks at enemies, like they did in Pikmin. If an enemy seizes a Pikmin that is holding a bomb rock, they will grab/eat the bomb rock (sometimes even sparing the Pikmin), which will explode and deal twice the damage than if it was thrown. The rocks also have a stronger blast than they did in the first game, since it only takes one blast to kill a Red Bulborb, whereas it takes at least two in the first game. In this game, Bomb Rocks can also unearth buried items when they explode near the items, unearthing an item in a single blast if it's right next to it. One rock can destroy a Dirt Wall, and two rocks can also destroy a Crystal Wall. While they are very useful items in this game, the player must take caution, as the blast will awaken any sleeping enemies onscreen.

In Story Mode, Pikmin can unearth Bomb Rocks by digging in mounds of dirt, which are most abundant in Tropical Wilds, though one is also found in the Formidable Oak. Four are also found on top of a tin can in one part of the Twilight River. Ten can be found in the cave with the Spotty Bulborb in the Distant Tundra. In Bingo Battle mode, they are a possible outcome of the cherry roulette.

Bomb Rocks will explode with a shorter fuse when a Purple Pikmin is thrown directly onto them: be warned, though, that the Pikmin in question is most likely going to be engulfed in the blast. Using a one-hit kill code from game-enhancing devices like Action Replay will also cause the bomb rock to explode instantly, as its health is instantly diminished.

In Pikmin 2, there is a small glitch regarding bomb rocks. In places where a Bomb rock falls near a Mitite, such as the sixth sublevel of the Bulblax Kingdom, there is a chance of the rock being launched back into the air if it lands on one, landing somewhere else on the Sublevel. It is also possible in the first two games that a yellow pikmin, when picking up a bomb rock, will attempt to pick it up, but will simply continue doing the pick-up animation. It will just stand there, lifting it up and dropping it until you call the pikmin back without the bomb rock. You can then throw the pikmin back and it should then pick it up fine.

A Yellow Pikmin with a Bomb Rock. 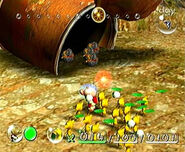 A few Bomb-rocks in a can. 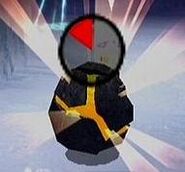 A Bomb Rock that is about to explode in Pikmin 2.

Olimar standing next to some bomb rocks.

A Bomb Rock as seen in Pikmin 3.

A Red Pikmin using a bomb rock on a Red Bulborb in Pikmin 3.

Bomb rocks as they appeared in Pikmin 3.

An unused texture from Pikmin, showing a Blue Pikmin with a Bomb Rock.