The Breadbug family is a family of creatures in the Pikmin games. The first members of this family were seen in Pikmin, but the actual family was not mentioned or named until Pikmin 2. They have a range of lifestyles depending on the particular species, from scavenging for second-hand kills to actually preying on smaller creatures. It is interesting to note that each member of this family can be defeated or at least damaged by throwing Pikmin onto its back.

The family is named after the vanilla Breadbug, which resembles a bread roll in appearance.

Dwarf Red Bulborbs are small, common enemies in all of the Pikmin games. They perfectly resemble Red Bulborbs in appearance, but with greatly diminished size. They are also diurnal, being active during the day, as opposed to the Bulborbs they mimic.

Many players were not aware that they were not juvenile Bulborbs until Pikmin 2's Piklopedia made the information more accessible, but the first game's Enemy Reel had in fact already revealed that they were imitators.

The Dwarf Orange Bulborb is an enemy in Pikmin 2 and Pikmin 3. It mimics the Orange Bulborb, but, like all other Breadbug family members, it is diurnal, unlike their nocturnal namesakes.

It is just as vigilant as the creature it imitates, noticing the player or Pikmin at throwing range. Other than that, they are very similar to the normal Dwarf Red Bulborbs.

The Fiery Dwarf Bulblax is a species of Breadbug found strictly in the Sweltering Parchlands of Hey! Pikmin. Fiery Dwarf Bulblaxes mimic the much larger Fiery Bulblax in appearance and behavior- the only Breadbug species to mimic a Bulblax rather than a Bulborb, though a distinctive feature is that it's capable of making a trail of flames wherever it walks.

The Fireflap Bulborb is a later species of Breadbug, the only Breadbug species capable of flight. This species had evolved from the Fiery Dwarf Bulblax to be able to fly, and much like its ancestor, is only found in the Sweltering Parchlands. While flying it drops burning flakes of its own skin underneath it, though if this is an intentional attack on the creature's part or not is still debatable.

The Crumbug is a miniature version of the Vanilla Breadbug seen in Hey! Pikmin, that takes one hit from a pikmin to defeat. Unlike its lager counterparts, the Crumbug attacks by eating pikmin, instead of taking treasure back to its den. The Crumbug is one of many creatures featured in the first level of Hey! Pikmin. Its scientific name is Pansarus carponae.

Vanilla Breadbugs, are found in the first two Pikmin games. Due to them being the most plentiful member of the family that does not imitate another creature, they are often called the Common Breadbug, or simply just the Breadbug. Oddly, the Breadbug does not reappear in Pikmin 3 whereas some other members of its family do. They are unable to cause harm to Pikmin directly, though one can do so by pulling objects away into its dwelling. If any Pikmin are carrying an object while it is sucked underground in this manner, they will die. But if there are enough Pikmin carrying the object, they will pull the object to the Ship's Research Pod or to the Onion, thus causing severe damage to it. The beast is heavy with thick blubber, making it immune to most attacks, rendering a direct hit the only other way to damage it. They are found much more commonly in Pikmin 2 than Pikmin. 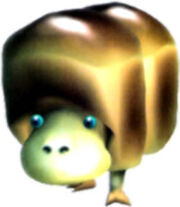 The Giant Breadbug is a boss in Pikmin 2. Unlike other Breadbugs, this one is large and has a more cubical shape, looking like a whole loaf of bread. It is by far the largest species in the Breadbug family, but at the same time is considered by many players to be the easiest boss in the game; the boss theme music is not even played when this creature is around, though an exclusive tune is played only in the specific cave sublevel. The more recognizable habitat is located on the last sublevel (6) of the Glutton's Kitchen and consists of only two other Breadbugs, electric nodes, and Anode Beetles.

The Snow Bulborb only appears in Pikmin 2. They are another subspecies of Dwarf Bulborb, these particular ones resembling hairless, miniature Hairy Bulborbs. They are as similar to the beast they endeavor to copy as any other Dwarf Bulborb, and defeated in much the same way. Their most common location is in the vicinity of one or more Hairy Bulborbs, or in cave terrain of snow or ice.