The Brute Knuckles is one of the treasures found in Pikmin 2. It is a toy punching glove that is found inside one of the four Mamutas in the fifth Sublevel of the cave Frontier Cavern. Defeat all the Mamutas in the area so they won't harm Olimar as the Pikmin carry the treasure back to the Pod. Make sure the Caustic Dweevils are gone so they won't carry the treasure on their backs. After the Research Pod cashes in the Brute Knuckles, Olimar will gain the Rocket Fist.

"Uncharted planets like this one are often teeming with hazardous fauna. The Pikmin are usually nearby to defend me, but there are times when I need to lay down the law with my own hands. For example, if a creature were to try to eat me, I'd have to beat it down. ...I dream about that all the time..."

"In a plume of flame, this steel fist flies and smashes its target to bits...but the recoil is severe. (Captain Olimar suffers from shoulder pain, so he uses it without the rocket booster.)"

The Rocket Fist, a component of the Exploration Kit, enables a new, stronger punching combo attack for use by the Captains, which makes defeating enemies with captains alone much easier and more efficient. Without the upgrade, the "A" button will produce a simple right punch. Once this treasure has been collected, pressing "A" a second time will perform a left-hook, and a third time launches a devastating wind-up punch. This third punch has the strength of roughly three normal punches, and can dispatch a smaller enemy, such as Dwarf Red Bulborbs, with minimum effort. It is capable of reaching flying enemies and other obstacles high in the air, such as Puffy Blowhogs, if positioned directly under them. 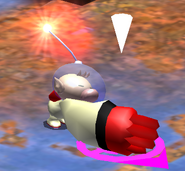 The Rocket Fist in use by Olimar. 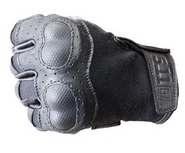