Pikmin
Register
Don't have an account?
Sign In
Advertisement
in: Featured articles, Clean it up, Pikmin species,
and 12 more

Adults: ハチャッピー, Juveniles: コッパチャッピー) are a parasitic species of Pikmin that have infected a Red Bulborb and taken control of it. It is hinted by Olimar that they can take on other hosts as well. They can be found wandering the floors of certain caves and behave much like the Spotty Bulbear, patrolling an established path in search of food. They can be dealt with similarly by using sprays or Purple Pikmin. Bulbmin are rare, appearing only in 3 caves in the game: the Frontier Cavern, the Hole of Heroes, and the Submerged Castle. Mature Bulbmin, acting as a Leader, can be followed by 10 or fewer juvenile Bulbmin depending on how many overall Pikmin you have with you at the moment. After defeating an adult Bulbmin, the smaller ones go into a panic. They are not dangerous, and whistling at them will instantly bring them into line under the leader's command, becoming a part of their Pikmin squad. They cannot leave the cave they were found in.

"The confused bulborb has fallen with the Pikmin. They appear to coexist peacefully."

"Strange...this bulborb has a leaf sprouting from its spine, much like the leaf on a Pikmin's head."

"This loathsome creature is in fact a parasitic form of Pikmin that has infected a bulborb. Unlike Pikmin that nest in Pikmin Onions, this parasitic relative spends its life inside the body of a host, usually a bulborb. Juveniles fall in line and mimic the actions of their parent until maturing to full independence. By burying its rootlike limbs into the nervous system of the host bulborb and infusing it with natural hormonal excretions, the bulbmin is able to control virtually all of the host's bodily functions. However, the host's voracious appetite seems impossible to suppress."

"Grind the meat and season with allspice, salt, and ground white pepper. Press the seasoned meat into meat satchels, then panfry them with onions. Prior to serving, smother the brats with dijon mustard and sauerkraut. Buns are optional."

"Large Bulbmin have a voracious appetite and can gobble up your Pikmin in a hurry. To avoid their mouths, attack them from their sides, and use purple Pikmin for maximum power. Once you've dealt with a Bulbmin leader, use your whistle to call its followers and bring them into your fold."

By whistling panicking Bulbmin, they will join the squad of Pikmin. The number of juvenile Bulbmin available depends on the Pikmin count. Since Bulbmin count as Pikmin, if there are 100 Pikmin already with the player, there will be no juvenile Bulbmin. One adult Bulbmin can command up to 10 juveniles. Since wild juveniles count towards the 100-Pikmin limit, how many spawn depends on whether or not the player has 10 available spaces. However, they do not count toward the overall Pikmin count.

Bulbmin are fairly average in terms of attack, throw height and mobility. The main draw to Bulbmin is that they are immune to all four of the main hazards: Fire, Water, Electricity, and Poison. They are not immune to Explosions, Crushing, Pits, or being eaten or stabbed. However, when under the command of an Adult Bulbmin, they are immune to Explosions, making bomb rocks an easy way to get rid of the adult and get the juvenile Bulbmin. In order to balance out their abilities, they are unable to leave caves. This makes them good options for Candypop Buds, especially on a sublevel close to the final sublevel. They only appear in Caves in Pikmin 2. They cannot leave the cave they are found in.

To ensure a low Pikmin loss, wait until it approaches the active Leader, then throw Pikmin rapidly on top of the beast, further to the back than the front. If done correctly and with good aim, it should shake them off and turn around slowly; it has been distracted, leaving a large time gap in which to swarm it. Do it, then, and it should die before it manages to swollow any pikmin it catches. If it is attacked by other bulbmin, it will hesitate slightly (presumably to check that it is not going to try to eat its own young) before attacking allowing more time to deal damage. Purple Pikmin work well.

As extra precautions or for an easier fight, use Purple Pikmin or an Ultra-Bitter Spray  if it captures any Pikmin.

Approach the Bulbmin as you would a roaming Bulbear; attacking it from behind and avoiding its bite. Although its health is significantly lower than a Bulbear's, it can still take a substantial amount of time to kill without the brute knuckles powerup. 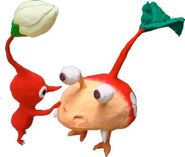 An official render featuring a mature Bulbmin and 3 juveniles. 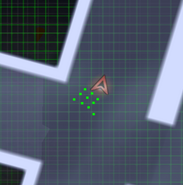 Bulbmin as they appear on the map screen.

Official render of an adult Bulbmin.

A group of juvenile Bulbmin.

An adult Bulbmin with juveniles. 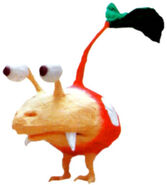 Front view of a Bulbmin and a group of juveniles. 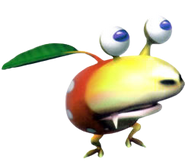 A transparent png of the Bulbmin