Bulborb Larva (ベビーチャッピー) are legless enemies in Pikmin 2. They are the true juvenile grub-dogs, as Dwarf Bulborbs are members of the Breadbug Family imitating bulborbs. Although they have not yet grown their own teeth like a mature Bulborb, they are hard to kill in swarms, but have very low health. Bulborb Larva are infamous for their ability to quickly kill Pikmin, as their bite is fast and fatal. However, the small creatures can be destroyed with one punch from a captain, so it is considered more effective to keep Pikmin away from the Larva and attack with Olimar and his copilot. For some strange reason, they prefer to attack captains rather than Pikmin or Bulbmin.

Bulborb Larva are continuously born from Empress Bulblaxes on Sublevel 8 of the Frontier Cavern, Sublevel 11 of the Hole of Heroes, and Sublevel 4 of the Emperor's Realm in Challenge Mode. Only 50 can be born, though this number is large. If 50 are on the field, the Empress Bulblax will stop giving birth and fall asleep shortly afterwards, but it will reawaken if you kill 25 or more. On the rear of a Bulborb Larva, the umbilical cord (the cord that connected it to its mother before it was born) can be seen. They are white with yellow faces.

"As its name implies, this creature is a bulborb in an early stage of development. Its distinct bulborb coloration has yet to appear, but it already exhibits other uniquely bulborb characteristics. It is capable of hunting nourishment independently without the help of its parents."

"This meager creature offers little meat, but its eyeballs are a local delicacy. Try them with okra and a dollop of sour cream!"

"The offspring of the Emperess Bulblax are small but hungry. They can swallow Pikmin whole. If your have to attack Bulborb Larvae with Pikmin, toss your troops and aim for the critters' backs. If one of your spacemen can go it alone, punch them for a quick defeat."

The best way to kill a Larva with Pikmin is to use Purple Pikmin. Purple Pikmin are capable of stunning and even killing a large group of Bulborb Larva. Just a couple of well-aimed Purples can kill a group, but, due to their infamy as one-hit killers, attacking them with a Captain is recommended over Pikmin, even Purples.

A different strategy is to stun them with about three or four Purples, then call them back and throw a lot of Pikmin on the mother. If done quickly enough, she will roll over her larva, killing them.

It is not recommended to use Yellow Pikmin to defeat Bulborb Larva due to Yellow Pikmin's high trajectory when thrown; the Pikmin may miss the enemy and it may be too late to whistle the Pikmin back. Red and Blue Pikmin may also be an unwise choice due to lower speed. White Pikmin are a better choice for speed, and in case the Bulborb Larva eats the Pikmin, their poison will at least finish them off.

Another way is to get the Pikmin you do not need and try to kill them in swarms by controlling them, though this method is not reccomended.

A single punch from a Captain is sufficient to kill a Bulborb Larva. Caution is advised, though, as they may still sneak in a bite as they are dying. The Rocket Fist, found in the same cave as the first encounter with the larva, can be used to kill many larva at once due to its range increase on the third strike.

A tactic that can be used in the later Empress Bulblax battles is to allow several dozen Larva to be born, then attack the Empress so it will roll around the cavern. As this happens, almost every single Larva will be killed, releasing a number of pools of Nectar for the Pikmin. In the second battle inside the Frontier Cavern, the larva can be trapped in a ledge where the Research Pod is by baiting them, and after the Empress is dead, a captain can go down and defeat all of the larva (But be careful. It is possible for a Bulborb Larva for some reason to get to the top of the cliff and start munching on the captain or Pikmin that are baiting them), resulting in many nectar pools. One strategy in killing the Empress is to have one captain, hopefully one that has full health, distract her larva near her rear end while the other captain attacks her from the front.

Another suggestion is to let her make tons and tons of Bulborb Larva, lead them into a corner, and keep punching them one by one to receive up to 20 drops of nectar. Do this with a Captain with full health.

It is also possible to kill them using the Empress Bulblax herself by standing in the hollow in front of it (as there always is) hurting the empress until she is forced to roll over, thus killing the larva. 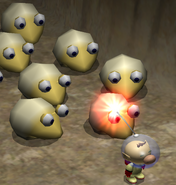 A group of Bulborb Larvae. 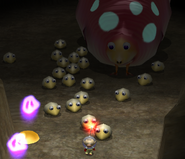 Olimar being followed by a group of Bulborb Larvae.