The Burgeoning Spiderwort is a plant in Pikmin 2 and Pikmin 3 that produces the berries needed to make the Ultra-Spicy and Ultra-Bitter Sprays. Each plant of this species can hold up to five berries, though not always the same kind of berry. They are found in the Awakening Wood, Perplexing Pool, and Wistful Wild in Pikmin 2, and the Tropical Wilds, Garden of Hope, Distant Tundra, and Twilight River areas in Pikmin 3.

In Pikmin 2, Ravenous Whiskerpillars can appear in their vicinity, as well as a type of mold that shows up and keeps the plants from growing. The berries can be harvested rather quickly with a medium-large group of Pikmin, but will not drop any berries with a small amount of Pikmin, as they get easily exhausted, give up, and drop off. Most Burgeoning Spiderworts regrow berries after being harvested 5 times each day, and usually right after all berries have been removed. This plant will bobble up and down after losing its berries, and after it does this 100 times, new berries will grow.

There are two Spiderworts a short walk away from the landing site, which both produce red berries. If looked at on a map, a player can see that they are found where you land in the Forest of Hope in the first game. In this area two Ravenous Whiskerpillars appear. They will climb up the stem and eat the berries, so attack them when they come out. They can't hurt Pikmin, and the berries will grow back. A mold may also appear here. If it does, attack the bulbous structure with Pikmin and it will eventually fall apart.

There is one near the area where the Iridescent Flint Beetle is, but it does not appear until Day 11. It is on a ledge and only produces red berries.

There is a final one near the entrance to the Bulblax Kingdom. To make reaching it easier, use blues to destroy the water gate behind the landing area. Have them attack the drain there and the water will disappear. Now walk up the slope here. Take a right next to the giant stump and the berry-bearing plant will be in view (Pikmin will take the berries over the ledge so don't worry about their safety). It only produces purple berries.

There are two near the treasure Gherkin Gate, both of which produce purple berries. A Fiery Blowhog and Swooping Snitchbug hang around here, as well as three Ravenous Whiskerpillars and the occasional mold.

Beyond the entrance of the Citadel of Spiders, there is a plant stemming from the water, so only Blue Pikmin can attack it. Only red berries are produced from it.

Near the path to the entrance of the Hole of Heroes, there is a large field with the most known in one area: three of the specified plant. All of them produce both kinds of berries. There are three Whiskerpillars here and a mold will cover each individual plant. A Fiery Blowhog and a Watery Blowhog keep watch over the molds.

There are two Burgeoning Spiderwort plants in this level. The first is fairly close to the Drake and Onion. Unfortunately, it is in a part of the Garden of Hope which the player must rescue Louie to get to. It is across a brown bridge, which must be built by the pikmin, being guarded by a waddlepus. It is one of the best places to get Spiderwort berries because there are no enemies between it and the Drake to catch any Pikmin taking them there, aside from the Waddlepus.

The second one is located even closer to the base, but only appears for a single day, the day when the player first has the oppritunity to first discover Blue Pikmin. It is located behind the landing site, near a pond with a Toady Bloyster, a Skitter Leaves, and a pair of Yellow Wollywogs. Once these threats have been cleared, Pikmin can quickly gather berries en masse, but only for that day.

There are 2 Burgeoning Spiderworts in this location. The first one is located near the exit to the Vehemoth Phosbat's cave and where the Dodge Whistle upgrade can be found. After clearing the area of the nearby Joustmite and Swooping Snitchbugs, Pikmin can harvest these safely.

The other Spiderwort is located on top of the pot where a pile of bridge fragments was located on the initial visit to the area. As such, this plant will not appear on the player's first time here. If the player uses Winged Pikmin to harvest it, they can fly over the river, safely bypassing the Joustmites sleeping below.

There is a single Burgoening Spiderwort plant located in the very center of the level. It is behind the landing site and just beyond the small body of water that holds a Cupid's Grenade. Once the nearby Reinforced Wall is blown down and the nearby bridge built, Pikmin will be able to more easily take these berries to the ship.

There are 2 Burgeoning Spiderworts in this area. The first one is located just across the river behind the Drake and behind an Electrified Gate. Once the nearby Yellow Wollywogs have been dealt with, Pikmin can heavest these safely. Oddly, Winged Pikmin ride the lily pads back to the Drake, even though they can clearly fly over the river.

The second one is located right at the entrance of the level's second area. There is a nearby Arachnode, although it should not be much trouble if the player uses any color other than Winged Pikmin to harvest the berries. It is also highly recommended the player has Pikmin move the nearby box so they can have a much easier route back and forth between the berries and the Onion. 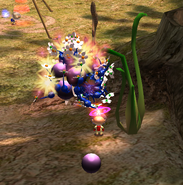 A Burgeoning Spiderwort being harvested by multiple blue Pikmin. 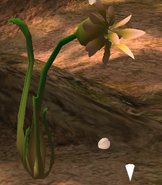 A Burgeoning Spiderwort, as it appears in Pikmin 3, can be seen in the bottom right corner of the image.

A Burgeoning Spiderwort in Pikmin 3

A shot of the Burgeoning Spiderwort's berries.
Add a photo to this gallery

Retrieved from "https://pikmin.fandom.com/wiki/Burgeoning_Spiderwort?oldid=122558"
Community content is available under CC-BY-SA unless otherwise noted.