Captain Charlie (キャプテン・チャーリー, Kyaputen Chārī) is one of the three playable characters in the story mode of Pikmin 3. He wears a spacesuit with a green lapel and a star-shaped badge on its left side.

He has an average-sized nose, a dark brown mohawk and a tiny mustache, and eyes that are wide open at all times. His skin is also the most tan out of the three explorers. He, along with Brittany and Alph, come from the planet Koppai in search of a new food source for their planet, and serves as the captain of their space-faring vessel, the S.S. Drake. He also takes a rubber ducky with him on every mission for good luck.[1].

Charlie is a retired space ranger and is revered as a hero on Koppai. Alph even describes him as "one of Koppai's greatest legends".

Charlie is the first playable character, but only for a small part of the beginning of the game. He becomes playable after defeating the Vehemoth Phosbat.

After an abrupt crash landing on PNF-404, Charlie awakens in the Distant Tundra. After exploring a bit, he discovers Yellow Pikmin. Although scared at first, he later learns to trust the creatures and, with their help, reaches a Phosbat den in hopes of reuniting with his crew. Suddenly, the Phosbat leader, the Vehemoth Phosbat, lunges at Charlie and consumes him.

After Alph and Brittany defeat the Vehemoth Phosbat, Charlie emerges from the creature's mouth, reunites with his crew, and gives them a Data File left behind by Captain Olimar, revealing that the cosmic-drive key needed to bring the S.S. Drake back to Koppai is with the Hocotatian. Charlie then becomes a playable character for the remainder of the game.

After traveling to the Twilight River, discovering Winged and Blue Pikmin, encountering Louie, and gathering fruit for Koppai, the three explorers arrive at the Formidable Oak to rescue Captain Olimar. They eventually find him lying on the ground, inert, with a golden creature above him. Charlie and Alph then guide the Pikmin carrying the unconscious captain, while Brittany attempts to fend off the golden creature, but it escapes, absorbs Olimar, and becomes the Plasm Wraith. After a long battle, Alph, Brittany, and Charlie defeat the creature with the help of their Pikmin and free Olimar, who apologaizes for the trouble Louie caused them and gives them their cosmic-drive key as a token of his gratitude. Because the Hocotate Ship had been destroyed by the Quaggled Mireclops, the explorers offer to return Olimar to Hocotate before heading back to Koppai.

When Pikmin 3 was translated for European audiences, his personality had been kept mostly the same, but after the game was ported to America, Nintendo of America changed most of his personality for unknown reasons.

Charlie is shown as a very capable, level-headed leader and shows a lot of care and a sense of protection towards the people he loves and respects. In some reports it's revealed that he prefers to stay vigilant near the S.S. Drakes door to protect his crew-mates and greatly appreciates their presence, since he was often alone in space during his youth as a ranger. Charlie also shows great interest in the natural landscapes of PNF-404, as he considers the beauty of the plants and flowers to have moved him in a way that's difficult to describe.

Charlie also seems to have a really keen interest towards ducks, demonstrating a lot of knowledge about them, owning a Rubber Ducky as a lucky charm and having a pet duck named Elizabeth whom he describes as his soulmate. There are many parts in the game's story where Charlie tries to show his deep affection towards Brittany, only to be interrupted by some other, pressing matter. His crush on Brittany is further accentuated in several reports where he plans to collect a few flowers as a present for Brittany and where he describes that, if he has to throw a crew member, he would always choose Alph first because "You shouldn't throw away the things you love..."

Charlie appears in Super Smash Bros. Ultimate as a Master Spirit who leads Spirits during cave explorations to find treasures. The fighter he possess is Alph and the stage you fight him in is Garden of Hope (Battlefield Form).

Charlie encountering the Yellow Pikmin for the very first time. 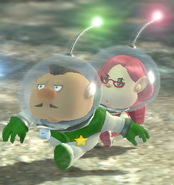 Charlie being followed by Brittany. 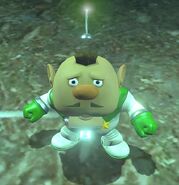 Charlie's final, horrified expression before being swallowed by the Vehemoth Phosbat.

Charlie after being rescued by Alph and Brittany.

Charlie using his KopPad to communicate with the S.S. Drake.