Pikmin
Register
Don't have an account?
Sign In
Advertisement
in: Pages that need images, Clovers, Pikmin 1 enemies,
and 9 more

Clovers are small clusters of three-leaved plants used as scenery in all three Pikmin games. In the first two games, they do not directly affect gameplay, although disturbing a clover patch can often scare Iridescent Flint Beetles out of hiding. Clovers can be seen in numerous overworld locations, but are particularly common on "rest levels" inside several caves.

In Pikmin 3, Clovers play a particular role in gameplay; Pikmin and captains can hide in patches of Clovers from enemies.

This plant should not be confused with the Science Project, a treasure that is a single four-leaved clover.

"This is a naturalized species. These plants are extremely persistent, and with the assistance of a symbiotic fungus that grows on its roots, the species is able to survive even in drought conditions. Typically, its leaves come in groupings of three, but intense impact on the leafing stem early in the development cycle can result in an extremely rare four-leaf cluster."

"The treasure known as the Science Project is a dead ringer for a clover. The only way that you'll be able to distinguish it from the rest is that it'll set off the Treasure Gauge."

Artwork for the clover. 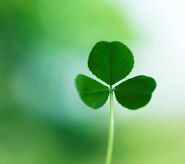 Another real world clover.
Community content is available under CC-BY-SA unless otherwise noted.