The Crawmads are crustacean-like enemies who live in holes they bury using their sharp claws. The family consists of three known species. For most members, their only method of attack is to lunge at captains and their pikmin, grabbing some, and scurrying back to their hole to eat them.

The Hermit Crawmad is a small crab like enemy with a strong carapace protecting the front part of its body. It's backside, however, is vulnerable and fleshy. In order to attack the backside, the player must lure the creature out of its hole using Pikmin, and then attack it. A quick charge with 40-50 Blues should defeat it in 1 or 2 tries.

Despite its similarities to the Squilla, it is actually related to the Hermit Crab, from which it originally evolved from. 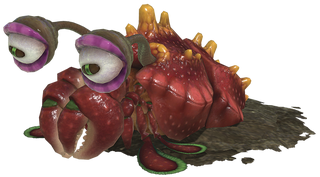 The Bug-Eyed Crawmad is a much larger relative of the Hermit Crawmad. Notable differences include large eyes on stalks as apposed to just the pupils, and the carapace now protects the creatures backside as well. It also features intimidating yellow spikes on its back. Because of its larger size, it does not need to leave the hole to attack Pikmin. Doing so wouldn't endanger it anyway, due it's backside being protected. Instead, the player must attack its larger eyes before it burrows underground. Doing so will cause it to flip over, and revealing its vulnerable, fleshy belly. Unfortunately, it cannot be charged at, due to its belly being raised in the air. 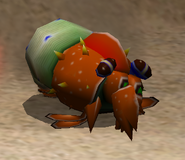