Distant Tundra is an area in Pikmin 3, and the third area in the game. The overall layout of the level is a flat, snowy environment with small areas containing exposed grass and dirt. The level is divided by a small river that cuts through the middle. The landing site is near the river. There are 16 fruits that can be found here.

The first time the player unlocks the area, The Drake flies too low to the ground and hits a rock, accidentally ejecting Brittany into the cave below. In this cave, she discovers the Yellow Pikmin and their Onion. Upon using the new Yellow Pikmin to open an entry to the outside, she discovers that she and Alph are separated by a river, which must be overcome by two bridges, which each captain must help each other build. Until the player reunites the two captains, Brittany will not be able to return to Drake at the end of the day or if knocked out and will go unfed until reunited.

This is also the area where the player fights the Vehemoth Phosbat, the game's second boss, and unlocks Charlie as a playable character.

The Distant Tundra is a large snowy area. The entire area is split in half by a large river which runs through the middle. This river is the main obstacle the first time the player visits the tundra, because the river is blocking the path to the other side, where Brittany is located. Because of the cold climate, many enemies that cannot be found in other areas are found here, such as the Bearded Amprat or the Arctic Cannon Larva. This area is also home to many caves. The northern-most cave is home to the Yellow Pikmin and their onion. In a cave to the southeast is where the Vehemoth Phosbat and it's kind reside. To the northeast lies a small pond, home to the Arctic Shaggy Long Legs. To the northwest lies a cave that is home to the Spotty Bulbear, it's only location in story mode. All in all, this area is much different from the other areas. 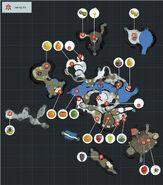 A full map of the Distant Tundra.

An overview of an area containing many Spotcaps and a 5 Pellet Posy.

An area of The Distant Tundra.

A high view of the Phosbat Cave from the electric box. 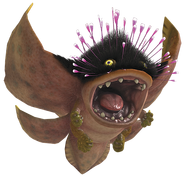 Found in the tunnel below the snowman with a Cupid's Grenade.

In the room with the Citrus Lump and Pyroclasmic Slooches.

Found near the Bouncy Mushroom near the Bearded Amprat.