The Extraordinary Bolt is a large, but very plain ship part found in Pikmin. It has a red plating on the bottom of it. It is described by Olimar as being "Extraordinary!"

"It's the Extraordinary Bolt! I bought this incredible bolt because the salesman told me it is of extraordinary quality that is indiscernible to the average person. Exactly what makes it so extraordinary is a secret. But just look at it! Extraordinary!"

"This bolt's bolt holds the kind of value that only a true connoisseur can understand."

The Extraordinary Bolt is found behind a Black Stone Gate past the original place of the Yellow Onion and the Whimsical Radar, an ideal place to test the usage of Yellow Pikmin with Bomb Rocks. It takes nine Bomb Rocks to destroy this gate, and there is also a path to the ship that should be secured first, especially considering the nearby Sheargrubs and Spotty Bulborbs, if they haven't already been defeated. If Olimar is planning to defeat them, he must defeat them himself instead of with his Pikmin.

In Pikmin 2, the Hole of Beasts replaces this part's location. 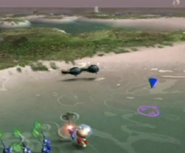 Retrieved from "https://pikmin.fandom.com/wiki/Extraordinary_Bolt?oldid=126817"
Community content is available under CC-BY-SA unless otherwise noted.