The Fiery Bulblax (ヤキチャッピー) is an uncommon enemy found in Pikmin 2. Its body parts appear to be melting away from its body's intense heat waves, and more strangely, one of its eyes is smaller than the other. Its fiery aura is caused by the glands and oils on this creature's body that result in a chemical reaction, which causes a fire to ignite on its hide. Only Red Pikmin can withstand the blaze of this creature's body. However, if lured to water, the flame will go out, allowing Blue Pikmin to attack it. If it enters water it will try to go back to where it was sleeping, and will sometimes ignore any Pikmin attacking it. It is recommended to use a spray against this enemy because it is more aggressive than other members of its family. Due to the Bulblax's curtain-esque shape, pikmin may get stuck under its body when they carry it. If that happens, call them and try dismissing them to pick it back up. As well as sharing the name with it, the Fiery Bulblax's melted features make it resemble the Emperor Bulblax, despite being the same size and having the same attack strategy as the smaller members of the Grub-Dog species.

The Fiery Bulblax is like all Grub-dogs in the fact that it has short legs, bulbous eyes, and a massive body. However, the Fiery Bulblax gets its name from the fact that it is enveloped in fire, and it is due to this fire that the Fiery Bulblax has a melted appearance, with its backside a burnt red and ending in curtain-like folds, its mouth looking slightly molten to resemble the Emperor Bulblax, and one eye being notably smaller than the other. This fire results from a particular bodily excretion, mainly from the back, as supported by the fact that fire is most visible from there, which "interacts with the cell structure of this grub-dog's skin." Its skin's cell structure is spongy, which allows the Bulblax to diffuse this heat and protects its organs from being fried. This does not prevent the Bulblax's prey from being burned, however, so this attribute makes this particular species of Grub-dog much deadlier than most of its relatives.

It is worth noting that the Fiery Bulblax's asymmetric appearance is unique in the Pikmin world, with any asymmetry existent in only a minute fraction of the ecosystem.

"Bodily excretions of a highly flammable waxy substance interact with the cell structure of this grub-dog's skin, causing a chemical reaction that produces extremely high temperatures. The skin benefits from a spongy cell structure that diffuses the surface heat, protecting the creature's inner organs. Due to the astonishing amount of heat produced by this beast, it should be observed with great caution."

"No stove? No problem! This sizzling beast practically cooks itself. Remember to thoroughly extinguish the steaks prior to eating."

"Flames rise from the Firey Bulblax. If you can draw one of the specimens into water, you'll extigush the flames and open it up to attack from any Pikmin type. If not, you'll have to use red Pikmin or Bulbmin to beat it. Like large Bulborbs, Firey Bulblaxes devour Pikmin. Keep troops away from their mouths."

Obviously, Red Pikmin are desirable due to their resistance of the flames emitted from the Fiery Bulbax's abdomen. Defeat it as if it were a standard Red Bulborb, by peppering its back with reds. Fiery Bulblaxes have high health for a grub-dog and can sometimes attack after shaking Pikmin off. Fiery Bulblaxes can also eat Pikmin much faster than a normal Bulborb can. An Ultra-spicy Spray may be desirable for killing it effectively and without danger. Additionally, simply swarming it with a squad of 50+ red pikmin can kill it within seconds without any casualties, even without sprays, but this is best done quickly, and from the back, while the creature is sleeping.

However, sometimes a Fiery Bulblax must be fought with Blue Pikmin, such as the lone one at the Valley of Repose. To kill it here, lure it into the water. The flames on its back will go out, but it will soon realize this, turn around, and head for dry land. During that time its primary urge will be to leave the water and re-ignite, so in this short space of time Pikmin will be safe from attack. Since repeatedly throwing blues at it puts them at high risk of being eaten, simply use an Ultra-bitter Spray and beat it. Note that spraying a Fiery Bulblax that has not been extinguished will still have flames coming out of its back.

Environment permitting, it is possible to lure the Fiery Bulblax to the limit of its natural roaming space, where it will look around before turning back. If attacked while it is moving back, it will shake off the Pikmin without attempting to eat any before it takes a few more steps and turning around. Repeating this a few times will be sufficient to kill.

A more risky way of defeating this creature is to throw many Purple Pikmin at it, and each will deal some damage before bursting into flames. Save them and, while the Fiery Bulblax is still stunned, attack again. This eliminates the need for Blue or Red Pikmin.

It is possible to kill it with the use of the captains, but resorting to this method not only consumes time, it also puts the captains at risk. Since it takes so long, it isn't recommended that you use a captain unless you're in a cave. A hit-and-run tactic can be useful for avoiding damage, so all you must do is punch the creature while dodging its bites. The Rocket Fist upgrade is highly recommended, as it makes the task considerably less laborsome.

If you fight it while in water with Blue Pikmin, as soon as it gets out of the water, the fire starts again. However, the Blue Pikmin that are still latched on to its body will not get burnt.

Another rare glitch is when the Bulblax becomes frozen and can be killed by captains. In the Valley of Repose, go to where the Firey Bulblax is. Lure it into the water to extinguish it's flames. It should then become idle. This glitch is really rare, so don't think it will work the first time.

Olimar and Louie, next to a Fiery Bulblax in the Perplexing Pool. 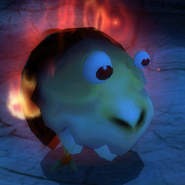 Fighting a Fiery Bulblax in a cave.

Community content is available under CC-BY-SA unless otherwise noted.