Pikmin
Register
Don't have an account?
Sign In
Advertisement
in: Pages that need images, Foxtails, Pikmin 2 enemies,
and 6 more

Foxtails are rare plants used for scenery in Pikmin 2; they are only seen in the Valley of Repose and Wistful Wild, and never in caves. They do not affect gameplay at all, as they are only for decoration. These plants appear as withered grass stalks with a plume of seeds on the tip, though the exact real-world species cannot be identified.

"This plant remains erect after withering and losing its color, so we can only hypothesize about the true color of the plant's plumage. However, local soil analysis indicates trace amounts of dormant seeds, making it not hard to imagine that the area was thick with these plants in the summer."

Tall foxtails give any field rustic beauty. The feathery foliage grows thick in places where the sun shines and the weather is warm." 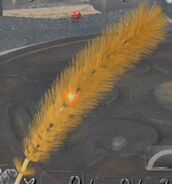 A close up of an in-game foxtail.

A real-world foxtail, before drying out.