After Alph recovers Drake on Day 1, he must find Brittany, and notices a signal coming from another area. Alph lands to investigate, and after discovering the Rock Pikmin is able to free Brittany. The reunited explorers work together to build a bridge to a hollow tree stump where the signal is coming from. After a battle with the game's first boss, the Armored Mawdad, the signal is revealed to be coming from a cell phone the Mawdad has ingested. Upon returning it to Drake, the whereabouts of Charlie are revealed and the Distant Tundra is discovered.

After recovering Louie from Twilight River later in the game, Louie will land the S.S. Drake while Alph, Brittany and Charlie sleep, and run off into the background, after which a huge explosion will be heard, blowing something off screen up. Traveling to the right of the landing site will reveal that Louie somehow blew a hole open in a large cinderblock, granting the player access to the second half of the level, where they will discover the Blue Pikmin. This is also where the player will fight the game's fifth boss, the Quaggled Mireclops, which has abducted Louie.

The Garden of Hope appears to be main forest level in Pikmin 3 and looks, in terrain, similar to that of the Impact Site, Forest of Hope, and Awakening Wood. However, towards the Southwest is an area with a large amount of water. Further southeast is home to the Quaggled Mireclops, which is inside an unusually muddy area. To the northwest is a large tree hollow which is home to the Armored Mawdad. The Bug-Eyed Crawmads can be found in a cave to the Northeast and in the southwest beach area. In the beach area, many aquatic creatures reside, including the Toady Bloyster and Sputtlefish. This area is also home to standard creatures like Bulborbs and Fiery Blowhogs. This is the only area with Elevator Platforms. The southwest area is closed off until Louie escapes from the Drake.

Found in the area where Brittany is found.

Found in the sewage pipe near the Blue Onion.

Found inside the bucket outside of the Mireclops's Arena.

A full map of the Garden of Hope.

The path to the Armored Mawdad's lair, which is the interior of a rotting, hollow tree.

An example of the beautiful scenery in this flora-filled area.

The SS Drake and the Onion flying over the area.

Spatial view of Garden of Hope.

An Iridescent Flint Beetle coming out from some Yellow Wood Sorrel. 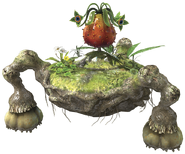