The Gatling Groink (タマコキン) is an enemy in Pikmin 2. It is a large biomechanical creature resembling a rotund goldfish with what appears to be a windshield between its two forward-facing eyes, two legs, a tail, and a mouthplate which covers a cannon that fires mortar rounds. The origins of the mechanical parts are unknown, much like the Man-at-Legs.

Groinks can usually be found patrolling caves and are known to actively hunt the active captain and his Pikmin. A stronger variation of the Groink is found on top of hard-to-reach towers, giving it a wide attack range, which is especially annoying when they are in possession of a treasure and cannot merely be avoided. It attacks by initiating a cannon from its mouth and fires three mortars (with very little time between firings). Of the three mortars, one is randomly selected to have killing potential, the other two mortars can merely knock back and deflower pikmin. The blast radius of the individual mortars appears to be slightly smaller than that of a bomb rock.

If used correctly and carefully, the Gatling Groink's cannon can be used to kill other enemies, and even airborne enemies. To do this, the Gatling Groink must fire at the active captain while he is standing near or under an enemy. If this is done correctly, it should be able to kill most large ground enemies in three to four shots. The shells will not harm the Gatling Groink itself, however. The Groink will also destroy every type of hazard except for Bomb Rocks. This can be used to the players advantage by destroying the two poison gates in the Wistful Wild.

"This beastly predator's aggressive ejection of high-speed projectiles makes it one of the most fearsome creatures in the ecosystem. Its body seems to comprise of both biological and mechanical components, and represents one of the most evolutionarily advanced specimens ever observed. The chamber within its torso gives it rapid-fire bio-pellet launch capabilities. What appears to be a tail fin is in fact the base of its counter-weight and ammunition cylinder, so immobilizing this appendage will prevent the groink from attacking...at least in theory. Confirmation of this suspicion remains elusive, as nobody has volunteered to test it."

"Remove the cannon and ammo stockpile, then vigorously tenderize the meat with a heavy mallet. Stir-fry with caramelized onions and figwort sprouts. Spoon over a steaming bowl of fluffy white rice and douse with chili sauce."

"With a cannon for a snout and a sheild over its head, the Gatling Groink is a powerful and protected fighter. The best way to battle a Groink is to split your forces into two groups and have one unit act as a decoy while the other one attacks the creature from behind. It'll regenerate slowy after it's defeated."

In Challenge Mode's Secret Testing Range, if a Gatling Groink is allowed to regenerate after it dies, it will sometimes come back as a sped up version that walks and shoots four times faster than normal. This can also occur during the End Of Day sequence.

In Sublevel 7 of the Subterranean Complex, it is possible for Olimar to actually push the Gatling Groink off the edge. To perform this, you must first have the rocket fist. You must carefully make the Gatling Groink follow you to a sloped edge and have it face the wall. (This can be done by having it follow you to the edge and get right under its body so it looks towards the edge.) Once you have done this, quickly hurry around to the other side of its body and rocket punch him any number of times. If done correctly, one of the times he will fall onto the edge and gently slide down. You can perform this glitch with both, however you'd need to have the one on the tower be revived first.

In the Wistful Wild area, at the end of the day when you're blasting off, if the Gatling Groink is in the cutscene, it can actually shoot your Captains and damage them. This glitch does absolutely nothing and your Captain can't be downed by this. This is just a fun little secret you can perform.

Another glitch that can happen at any time and can be a real relief- (it should be noted, however, that this does not help by no-death runs). Sometimes, when a Gatling Groink attacks, its attack injures but doesn't kill the Pikmin. At the day's end when it tallies your Pikmin, created and killed, it counts the Pikmin that were supposed to die from the mortar blasts.

The best method to attack it is to throw Pikmin onto its sides and back, as the front has a protective shield.

Certainly the most effective strategy is to pummel it with heavy Purple Pikmin, as each one carries a chance of stunning the creature, preventing it from fighting back. Once defeated, this beast will begin to regenerate its health, just as the Spotty Bulbear does, making it crucial to carry it to the Onion, or Research Pod if underground. If not, it will revive within about two minutes, and then continue its attack. It is stated in Olimar's notes that if its tail were incapacitated, it would be incapable of attacking; in fact, if Pikmin are thrown on the tail, it will be unable to use its mortar, but will attempt to shake them off. It is recommended to carry back any Gatling Groink corpse due to the fact that it can revive itself after it has been killed.

However, in the Cavern of Chaos, they are accompanied by many Dwarf Red Bulborbs, in which case using an Ultra-bitter Spray would be wise. In the case of patrolling Gatling Groinks, it is also possible to attract the Groink's attention, and then move to a position in which a bottomless chasm is between the leader and the Groink. The Groink's stride is often high enough to step over the safety barriers that ordinarily stop leaders, Pikmin, and other creatures from falling into the chasms. In this case, the body will be irretrievable, although any treasures it may have been carrying will fall onto a random location on the map. 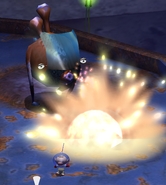 The mortar blast of a Gatling Groink. 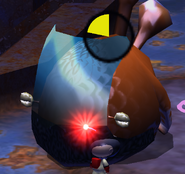 Fighting two Gatling Groinks in an unused cave.
Add a photo to this gallery

Retrieved from "https://pikmin.fandom.com/wiki/Gatling_Groink?oldid=132108"
Community content is available under CC-BY-SA unless otherwise noted.