The Giant Breadbug (オオパンモドキ) is a boss in Pikmin 2. Unlike other Breadbugs, this one is large and shaped somewhat cubical, looking like a loaf of bread, making it the largest species in the Breadbug family. It acts the same as normal Breadbugs, but is harder to damage by "rejection" from the pod. It is considered by many players to be the easiest boss in the game (boss theme music is not even played, though an exclusive tune is played only in the specific cave sublevel). The more recognizable habitat is located on the final sublevel of the Glutton's Kitchen and consists of only two other Breadbugs, electric nodes, and Anode Beetles. This creature is also found in the Snack Pit in Challenge Mode. The Giant Breadbug can replenish its HP if it collects an object into its den.

"This gargantuan species of the greater breadbug family has a torso so perfectly square that it almost seems like it was formed in a mold. For a brief period after birth, the giant breadbug competes for food with smaller breadbugs, but upon reaching maturity it seeks out much larger prey. This is the primary reason that two species with similar feeding habits can coexist in the same habitat. Hordes of Pikmin appear to pose the only plausible threat to this massive creature's life."

"Although cooking this colossal beast yields a mountain of meat, every ounce of it is flavorless. Only suitable for intergalactic all-you-can-eat buffets."

"Only purple Pikmin can stomp the Breadbug Boss. The best way to damage it is to beat it in a game of tug-of-war. Have your Pikmin grab the item that the bug is trying to take into its hole, and carry the prize to the ship. When the ship sucks it in, the Breadbug will be sucked upward, too, and hit the bottom of the ship."

The Giant Breadbug behaves almost identically to it's smaller brethren, so it can be fought the same way. Simply let the Giant Breadbug grab a treasure or corpse, and then have your Pikmin grab the treasure/corpse and drag both the object and the Breadbug to the pod. After doing this two times, the gargantuan beast will trouble you no longer.

If there are no treasures or corpses, you could throw Purple Pikmin on its back for around 1/20 damage per hit.

Spraying it with an Ultra-Bitter Spray will allow it to be swarmed. 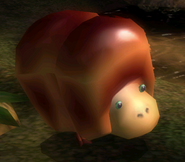 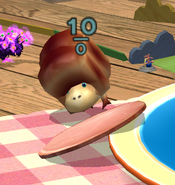 The Giant Breadbug dragging the Meat of Champions.

A test cave for the Giant Breadbug.

The Giant Breadbug's page in the offical Nintendo Power guidebook.