Hairy Bulborbs (ケチャッピー) are enemies in Pikmin 2. They are similar to Red Bulborbs, but their backsides are white with blue spots and possess a lot of fluffy, white fur. They are similar to most other mature Bulborbs, but tend to live in colder environments. They have less health and are more aggressive than the Red Bulborb and Orange Bulborb, having a chance to instantly eat Pikmin when swarmed and can be easily defeated by repeatedly throwing Purple Pikmin onto its back. Once this creature's health has been lowered to half, its hair will fall off, revealing its blue spots, making it resemble its Breadbug mimic, though larger in size.

"This subspecies of grub-dog has a thick coat of soft white fur that obscures its abdominal markings. The fur also warms its vital organs, making this species well adapted to colder climates. However, its hair follicles are surprisingly frail, which can result in immediate hair loss if the creature is surprised."

"Remove all of the bulborb's hair, wrap the beast in foil along with a halved lemon, and place it directly on the grill. The foil should protect the carcass from scorching, and the lemon will give the meat an elegant hint of citrus."

"As dangerous as any other giant Bulborb, the Hairy variety loses its fur as soon as you attack it. Try to sneak up on a Hairy Bulborb as it's sleeping, and launch a rear assault. If the creature charges, keep tossing Pikmin at it, and stay away from its chompers." 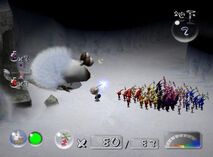 Louie and some Pikmin next to a Hairy Bulborb. 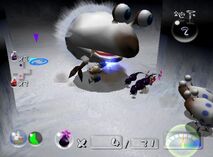 Louie, and some Purple Pikmin running from a Hairy Bulborb. 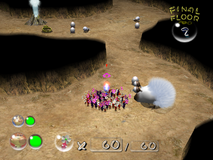 A Hairy Bulborb in Challenge Mode. 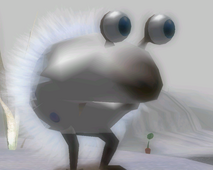 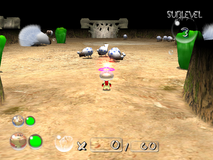 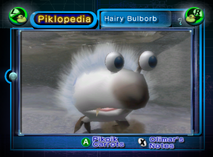 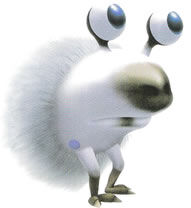 hairy bulborb
Add a photo to this gallery

Retrieved from "https://pikmin.fandom.com/wiki/Hairy_Bulborb?oldid=131311"
Community content is available under CC-BY-SA unless otherwise noted.