Hocotate Freight is a long-haul, deep-space shipping company that Captain Olimar works for, based on the planet Hocotate. It appears to be situated on the southern hemisphere of Hocotate. The President of Hocotate Freight leads the company, and its only known employees are Olimar and Louie. However, in an E-Mail, the President's wife claims that she does all the work. Hocotate Freight had no known financial difficulties until Louie lost his cargo of Golden Pikpik Carrots, reportedly to a space bunny, while Olimar was on vacation, forcing Hocotate Freight to sell most of its possessions and take out an enormous loan. Hocotate Freight sells Olimar's ship to pay for the debt while he is away, but they are still left with a debt of

As soon as Olimar returns from the planet of the Pikmin, he is informed of the situation by the President of Hocotate Freight, and of his ship, the S.S. Dolphin, being sold: it is confiscated as he arrives. In shock, Olimar drops the bottle cap he has been holding, which was meant as a souvenir for his son, and it rolls to the ground, causing the sensors of an old ship behind the President to go wild. The Ship proceeds to announce that the bottle cap is worth

x100, after which the President orders Olimar to go back to the Pikmin planet with Louie to find enough treasure to cover the now 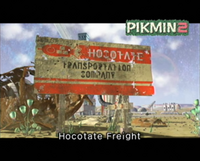 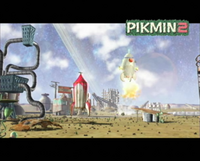 The Dolphin and the Ship at Hocotate Freight. 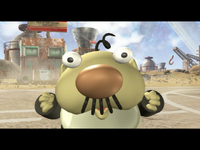 A closer look at the company's building (and The President)

Close up of Hocotate Freight Logo