Honeywisps (ピキマキ Pikimaki) are very mysterious creatures found in both Pikmin and Pikmin 2 . Very little is known about them due to the fact that they dissolve immediately upon death. They glow and tend to make high pitched cries. They float across the air carrying a drop of nectar or, in Pikmin 2, an egg (which immediately hatches upon hitting the ground). If a Pikmin is thrown at them, they will drop their nectar or egg and vanish. The eggs usually contain nectar, but spray or Mitites are occasionally found inside. Mitites are found in their eggs because of their parasitic characteristics. These enemies cannot be petrified.

Pikmin is the only game where Honeywisps are seen carrying purely nectar. In Pikmin 2, they carry eggs, which may contain nectar, Mitites or one dose of a spray.

"This timid creature flies around collecting nectar from flowers. It typically hides itself, but shaking flowers can reveal its presence. The nectar it collects appears to be the Pikmin's favorite food. They instantly bloom when they eat it."

"This creature collects nectar for the larvae waiting in its nest."

"This floating life-form drifts effortlessly on the winds. Upon death, its physical structure instantly collapses, and as the creature is particularly elusive and difficult to catch, no sample specimens have been acquired as of yet. If we could simply recover a live sample, research on this species would likely proceed more smoothly..."

"Although the eggs are small, the yolk has a distinctly bold and tangy flavor. Try tossing a few in a pan along with your choice of meat and fresh vegetables and cook up a country scramble!"

"Flighty floats carry eggs that contain nectar. If you can hit a Honeywisp with a lobbed Pikmin, the creature will disappear, but its egg with drop and spill its contents. Honeywisps materialize in an instant and flash away just as quickly. If you want to hit one, you'll have to work quickly."

"The nectar spectre seems to appear out of thin air, and it is able to hover in place with little movement. Large drops of nectar form on the spectre's tail, and it is uncertain as to whether the fleeting creature secretes the fluid from its transparent body or accumulates the substance via pollination. Appropriately named for its elusive nature, the nectar spectre remains very much a mystery and requires further research. This creature collects nectar for the larvae waiting in its nest."

Since Honeywisps disappear quite often upon approach, it might take time to nail a hit. Once you get it in a good position, you can just throw a Pikmin at it, killing the Honeywisp instantly upon contact.

A Honeywisp from Pikmin 2, carrying an egg. 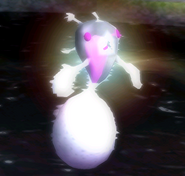 A high quality screenshot of a Honeywisp in Pikmin 2.

A honeywisp in the creature montage
Deutsch
Community content is available under CC-BY-SA unless otherwise noted.
Advertisement