The Iridescent Flint Beetle (コガネモチ)​ is an enemy found in all Pikmin games. It is a beetle with an ovular, iridescent green carapace. To attack it, one must throw a Pikmin directly onto it, at which it glows red while overturning and drops a useful object; Pikmin attacking from the ground cannot harm it. This creature disappears after a certain amount of time has passed or it has been overturned enough times. Pikmin used to swarm around it if idle, but that was changed in Pikmin 2.

In Pikmin, these bugs appear much larger than in Pikmin 2, and have a slightly different coloration. They are more common, and are somewhat helpful. They are mostly found in foliage or in corners. When hit, they first drop a 1-pellet, then, when hit again, they drop two doses of nectar. Upon the next direct hit more doses of nectar are released, and then a 5-pellet. This cycle repeats once more, ending after the second 5 -and swift movement. It also poses an indirect threat to Pikmin, as it will often run through Olimar's army. This results in the Pikmin automatically attacking and chasing it unless called back, which can lead them into danger.

In the Challenge Mode at The Impact Site, an Iridescent Flint Beetle may push a red 20 pellet out of the fire so Pikmin that are not Red Pikmin may carry it.

In Pikmin 2, Pikmin no longer attack Iridescent Flint Beetles automatically as they do in the original game. In all Pikmin 2 Challenge Mode levels they're in, these creatures rarely drop treasures. They are found in similar locations, but only drop three things: a 1-pellet (a dose of nectar if it's underground), 2 doses of nectar, and then a dose of Ultra-Spicy Spray (three doses of nectar if the Ultra-Spicy Spray hasn't been discovered yet). Using Purple Pikmin, it is easier to fight them due to the shockwaves that the heavy Purple Pikmin produce when thrown.

As a sidenote, it is possible to defeat these creatures while petrified, but they drop neither nectar nor spray and leave no corpse.

On the main menu of Pikmin 2, if you press Z (New Play Control!) a Iridescent Flint Beetle may appear that can be controlled with the C Stick (Gamecube) or the D-pad (New Play Control!). The beetle will be attacked when they get close to the Pikmin.

In the Pikmin 3, the Iridescent Flint Beetle has more of a spread out, saucer-like, shinier body. Instead of stripes, it has four blotchy spots. It has visible eyes atop two stalks, as well as two horizontally-facing antennae. It has teal blotches scattered across its carapace. Only 2 are seen in Story Mode, with one in the Twilight River, and the other in the Garden of Hope. Both are located just outside the base.

"This creature's hypnotic reflective body is quite hard, giving it a good defense against Pikmin attacks. Why, then, do the Pikmin chase it in such a frenzy? I wonder if it will undergo any change if I hit it directly with Pikmin..."

"This forager stores undigested pellets in its stomach for winter."

"Flint beetles are nocturnal, choosing to hide in the grass by day and stay active at night. These creatures keep undigested food pellets in their stomachs to sustain them through winter, but given the right stimulus they will spit them out. Recent research has revealed that these pellets are enveloped in a membrane that seals and preserves them in a sterile, airtight environment. If kept at room temperature, it seems that this pellet membrane will keep its contents fresh for up to six months. The membrane may be made from the same substance that gives the exoskeleton of the flint beetle its beautiful sheen."

"An essential flavor-accentuating ingredient in gumbo and jambalaya. Also delicious in soups, broths, and marinades."

"Squirrely Flint Beetles hold nectar. They won't harm your Pikmin, but they won't stand and let you defeat them, either. If you're on the trail of an Iridescent Flint Beetle, anticipate when it will stop moving, aim, then hit it with a quick accurate toss."

"The Iridescent Flint Beetle is a harmless burrowing creature. Attacking the creature generally yields a nice supply of pellets and Nectar.

"These guys appear in the Pikmin series, dropping rare items and fleeing nearby Pikmin. Purple Pikmin can flip them over, making the whole "getting rare items" process a lot easier. According to Louie, cooking one of these guys yields a meal with a distinct and delicious flavor." 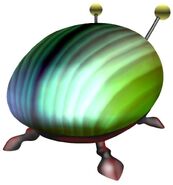 The Iridescent Flint Beetle in Pikmin.

An Iridescent Flint Beetle in Pikmin 2.

Art of the Iridescent Flint Beetle from the Official Nintendo Magazine

A better look at the Iridescent Flint Beetle in Pikmin 3.

A detailed side view of the Flint Beetle, next to the Onion from Pikmin 3

Retrieved from "https://pikmin.fandom.com/wiki/Iridescent_Flint_Beetle?oldid=128282"
Community content is available under CC-BY-SA unless otherwise noted.