The Iridescent Glint Beetle (オオガネモチ) is an enemy in Pikmin 2. They resemble golden, sparkling Iridescent Flint Beetles, but are much rarer; the majority of these creatures are found underground, with only two appearances above ground, both in the Awakening Wood. One is inside the pot to the right of the Figworts near the end of the constructable bridge, and the other is on the raised area near the entrance to Snagret Hole, to the left of the cave in a corner just before the ledge.

It drops three random-colored 5-pellets and then two doses of Ultra-Spicy Spray when hit with a Pikmin. Underground, the pellets are swapped for three doses of nectar. If the ultra-spicy spray has not been unlocked yet, it just drops more nectar (three doses) in place of the sprays. Occasionally, depending on where it is located, this creature drops a treasure instead. Just like the Iridescent Flint Beetle, if this creature is attacked after being petrified, it will shatter. It can also be chased off cliffs in some caves.

"This variety of beetle consumes subterranean minerals. Due to the fact that it rarely emerges above ground, sightings of this particular species are extremely rare. While minerals are this beast's primary source of food, the beetle itself does not have the ability to digest these minerals. Instead, metabacteria living inside the beetle's stomach chemically break down the minerals. The resulting purified metal is discharged, but rare metals such as gold and platinum crystallize onto the iridescent glint beetle's shell, resulting in the beautiful laminated shimmer."

"This precious treat is exceptionally rare. I could sell it back home for a fortune! Then, I could use the cash to upgrade my kitchen, buy galactic-class ingredients, and even star in my own cooking show... The Insect Gourmet!"

"Like Flint Beetles, Glint Beetles surface for only a few seconds at a time. When one appears near your troops, you'll have a couple of chances to aim and throw before it goes below the surface again. In a few rare circumstances, Iridescent Glint Beetles hold treasure."

Super Smash Bros. for Nintendo 3DS and Wii U Trophy

"Hope you're not scared of bugs... In Pikmin, these guys drop nectar, but in Smash Run they drop coins instead. They hide, waiting for fighters to get too close...then strike! They're tough to catch, but your reward for success is coins, coins, coins. They'll slink away to sulk after being properly robbed."

In Super Smash Bros. for 3DS

"There are other bonus characters that appear in this game, too. Here's an Iridescent Glint Beetle from the Pikmin series. Keep hitting it!! Keep hitting it for gold!!" 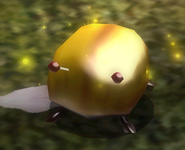