The Joustmite (カブリムシ) is a type of enemy found in Pikmin 3 that both resembles and acts like the Cloaking Burrow-nit (along with the Flighty Joustmite), although it's not confirmed whether they're part of the same family or not. Unlike it's Cloaking cousin, the Joustmite uses its shell to shield its face rather than its rear (its weakpoint).

Just like the Burrow-nit, it hides partially buried in the ground, waiting for unsuspecting prey. Once a player enters the attack range of the Joustmite, it pops out from under the ground and proceeds to attack the player's Pikmin by attempting to use its long, needle-like proboscis to spear them. It can shake Pikmin off by bucking, shaking its loose carapace. Unlike the Cloaking Burrow-nit, it can catch up to three Pikmin at once and kill them much faster.

"The Joustmite spends most of its time partially buried with its colorful shell protruding from the ground. When it senses nearby prey, this well-armored creature emerges and uses its retractable beak to skewer nearby victims.

Rock Pikmin cannot be damaged by the Joustmite's attacks, making them a very good option when facing this enemy. When you're leading a large squad, however, any combination of Pikmin can make short work of this enemy. Approach the Joustmite from the rear and attack the creature's fleshy body until you defeat it."

Rock Pikmin are impervious to its stabbing proboscis, making them highly effective to combat this creature. Charging the Joustmite from behind is also effective, just as long as the player has a large group of Pikmin. The Joustmite can eat Pikmin rather swiftly, so caution must be taken.

A Joustmite is about to strike.

A Joustmite buried in the ground.

An almost defeated Joustmite, with an English version of its scan. 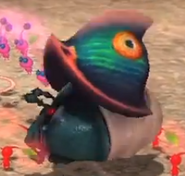 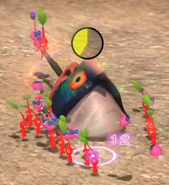 A dead Joustmite in the Distant Tundra area.

A frontal view of the Joustmite.

A side view of a wandering Joustmite.