The Pikmin Leaders are the characters of whom the player has control. In Pikmin, there is only Captain Olimar, an employee of Hocotate Freight who crash-landed on PNF-404. In Pikmin 2, Louie makes his debut as the deuteragonist, also controlled by the player; it is possible to switch between the two playable Leaders by pressing the "Y" button ("-" button in New Play Control! and Pikmin 3). Later in the game, The President becomes a playable leader. (Note: unlike Pikmin 3, you cannot control both Louie and The President. Once The President becomes playable, he permanently replaces Louie.) In Pikmin 3, there are 3 leaders. They are Alph, Brittany, and Charlie.

The leader is followed by the Pikmin he has called out of the Onion or plucked, as well as lone Pikmin he touches or whistles at. The leader can throw Pikmin for various purposes, or attack monsters himself when no Pikmin are nearby by punching. Puffstools, mature Bulbmin, and Antenna Beetles act as naturally occurring enemy leaders, in each of the two Pikmin games, stealing the player's Pikmin through various methods or scouting with their own, respectively. None except the Puffstool have any direct control over Pikmin.

Captain Olimar, often simply called Olimar, is the main protagonist of the Pikmin series. He was the first Hocotate Freight employee who discovered the Distant Planet. He is the leader of his personal ship, the S.S. Dolphin until it is sold to repay some of the debt at the start of Pikmin 2. His family consists of his wife, his son, and his daughter, who live on Hocotate and remain there throughout the two games in the Pikmin series.

Louie is the secondary protagonist in the Pikmin series. He first appears in Pikmin 2 and serves as a partner to Olimar, commanding Pikmin as his sidekick. He is controlled by Player 2 during multiplayer modes. He is relatively new to the shipping business and has a ravenous appetite. He was raised by his grandmother who made him play with bugs and eat them, from where it is assumed that his great affinity for cooking beasts in Pikmin 2 comes.

The President is the owner of Hocotate Freight and is the tertiary protagonist to the Pikmin series. He was first mentioned in Pikmin and later makes his debut in Pikmin 2 as a playable character. He is called "Shacho" in the Japanese version, which is Japanese for President and is often called by that name because he says it when you switch to his character (although it's commonly mistaken as "Schyaco", "Syecho", etc.).

He runs into financial trouble after Louie ate the aforementioned Pikpik Carrots. The President took out a large loan to reimburse the loss of the carrots and has no way of repaying the enormous debt. He sold off the only company asset, the S.S. Dolphin, in Olimar's absence, but it only made a small dent in the enormous loan, as

x10,100 are still owed by the time Olimar has returned. This, occurring after the events of Pikmin, shocks Captain Olimar. He is so surprised, in fact, by the news, that he drops a souvenir that he brought back from his "vacation" for his son. The souvenir, a bottle cap, worth

x100, is collected by the Hocotate Ship, which then evaluates the item as a treasure, reducing the debt to an even

Main article: Alph
Alph is the engineer of the group in Pikmin 3. When the three are ejected from Drake, he gains consciousness in a small body of water and proceeds to find the Red Pikmin. He then helps the Pikmin retrieve their Onion from a vine. He looks up to Charlie for some reason.

Main article: Brittany
Brittany is the botanist of the group in Pikmin 3. She goes missing in the beginning of the game, but is soon found by Alph. She is very sharp minded, but gluttonous as well.

Main article: Charlie
Charlie is the captain of the group in Pikmin 3. He lands in a snowy area after he is ejected from Drake. There, he finds a group of Yellow Pikmin. Later through the game, he regroups with Alph and Brittany. He strangely favors Brittany...Also, Charlie has a Rubber Duckie that he brings along on all of his missions for good luck.

Main article: Puffstool
The only enemy leader in the first Pikmin game is the Puffstool, who will shoot spores at Pikmin to posess them. These Mushroom Pikmin will follow the Puffstool around, and will chase Captain Olimar if he gets too close. Pikmin can be cured by either shaking them off or by killing the Puffstool.

Main article: Antenna Beetle
The Antenna Beetles found in Pikmin 2 are comparable to the Hocotatian leaders in that they can control Pikmin with the sounds they produce, apparently by flapping their wings. This appears to affect Pikmin in a similar way to the whistles of the other leaders. The only way to regain control of the capture Pikmin is to kill, stun, or chase away the Antenna Beetle. The Antenna Beetle's whistling range is notably larger than the leaders' without the Mega Tweeter.

Main article: Bulbmin
Bulbmin are Pikmin-Bulborb crosses that roam around caves. They have a maximum of 10 following Bulbmin. These Bulbmin do not do anything but follow their leader. The leader attacks by eating Pikmin just like normal Bulborbs do. When you kill the Bulbmin leader, the followers will get frightened and run around in circles. These Bulbmin can be called into your army, and act as additional Pikmin. They have immunities to the main 4 hazards. The downside to them is that they cannot be taken out of caves. When you take the geyser out of the cave, they remain at the base of the geyser. It is best to use Candypop Buds to convert them into other types of Pikmin which can be taken out of caves.

Main article: Scornet Maestro
The Scornet Maestro is the fourth major boss in Pikmin 3 story mode. It can commands up to 100 Scornets at the same time and use them to attack with various formations. They also protect it. After one of its assaults, the Scornets will be left for a while, and the player will be able to attack it.

When a leader loses all of their health, they become unconscious. In Pikmin, the day ends and all Pikmin that aren't in an Onion die. In Pikmin 2, this only occurs if both leaders faint; otherwise, the Pikmin that were with the leader become idle, and the leader is moved to the ship, where he lies on the floor until the end of the day.

In Pikmin, If Captain Olimar's suit takes too much damage, there will be a cut-scene with him slowly returning to the S.S. Dolphin, in a depressed, perhaps ashamed state. The words "Olimar is down" will then appear onscreen and the day's journal with read as follows:

"I've been careless, sustaining damage beyond my space suit's limits. My crisis transport system saved me, but I lost all of the Pikmin I had with me. I must pay closer mind to my space suit damage meter in the bottom-left corner of the screen. I can press A by the Dolphin to repair my suit." 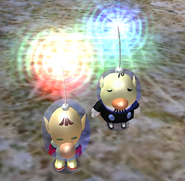 Captain Olimar and the President of Hocotate Freight 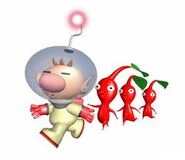 All 3 Leaders from Pikmin 3 (from left to right: Charlie, Brittany, Alph).

The three Leaders from Pikmin 3.

Olimar standing next to Louie
Deutsch
Community content is available under CC-BY-SA unless otherwise noted.
Advertisement