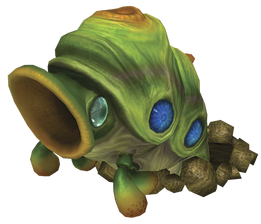 Armored Cannon Beetle Larvae are enemies in Pikmin 2 and Pikmin 3. They resemble large grubs with small blue eyes and a mouth bearing resemblance to that of the Armored Cannon Beetle. It also has a blowhole, but appears to inhale through its mouth, unlike the adult form. This animal behaves in much the same manner as the Armored Cannon Beetle, but turns and spits at a faster rate and has much less health. They do not have the hard exoskeleton the adults are infamous for, and are thus vulnerable on all parts of their body.

You can usually see this creature walking about, though they will sometimes burrow out of the dirt, usually on an elevated section of ground, and take shots at you from their perch. If you're in an open area, and are quick on your feet, you can sometimes get these giant grubs to fire rocks at and destroy other enemies. As a note, the rocks it shoots out cannot be petrified. 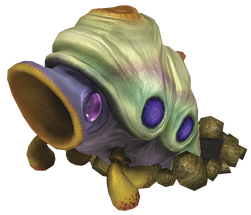 The Arctic Cannon Beetle is a variety of Lithopod that appears in Pikmin 3. It is a brighter whitish-green than the Armoured Cannon Larva with a lavender underbelly. Rather than shooting boulders from it's mouth, it instead shoots balls of snow.

The creature is incapable of killing Pikmin, rather simply scattering them as they caught in its snowballs. The snowballs, when hitting a wall or water, will scatter whatever was caught in it, damaging captains and carrying away Pikmin.

Decorated Cannon Beetles are enemies in Pikmin 2. They have an appearance identical to Armored Cannon Beetle Larvae, except they are red instead of green. They, too, spit out stones; but their rocks home in on your currently active captain due to the fact that magnetic substance is inside the rock, and unfortunately, the captains wear the metal it homes in on. This species is never found partially buried in the ground. Strangely, even when they are found in caves which are made of metal which is rusty, indicating it contains iron, the spacesuits are the only thing it homes in on.

The Armored Cannon Beetle is the mature specimen of an Armored Cannon Beetle Larva. Strangely, it was only seen in Pikmin, whereas the larval forms were exclusive to the second and third games. It is a large, black, metallic-looking beetle with a thick, rounded shell of armor, a blowhole above its head, and a mouth. It attacks by inhaling through its blowhole and subsequently spitting out rolling rocks from its mouth, crushing any Pikmin in the way. The only way to defeat it is to clog its blowhole with a Pikmin, which will cause the beetle to expose its steaming red backside, possibly either to breathe or cool off. This is its only weak point, so attack it with Pikmin when you get the chance. After a few seconds of agony, the Beetle will eject the obstructing Pikmin (which is thankfully unharmed, though they may lose their flowers), re-cover its backside, and continue its attack. This is one of the few insectoid creatures in the series whose adult and larval stages are both seen. Strangely, Captain Olimar can destroy the boulders by punching them, but the boulders that come out of their offspring cannot be destroyed unless Purple Pikmin are used. They also cannot be petrified.