Pikmin
Register
Don't have an account?
Sign In
Advertisement
in: Creatures with no known family, Pikmin 1 enemies, Pikmin 2 enemies,
and 16 more

The Mamuta (ミウリン) is a peculiar enemy found in the first two Pikmin games. It is fairly large, and has two small eyes with dark markings around each one. Its body is notably asymmetrical and is covered in tiny white and grey hairs. It has markings on its arms, hinting it might be sapient. In the first game, it just stands and watches when Pikmin walk by. If any harm comes to it, however, it becomes enraged and pounds the Pikmin into the ground. This doesn't kill them, but replants them and turns them into flower Pikmin by some unknown process, which can be used to one's advantage, though it can get very annoying when it comes to plucking the Pikmin if one is in a hurry. However, with the Pluckaphone, a Mamuta can do more good than bad, as the planted Pikmin can simply be called out of the ground.

Captains, as opposed to Pikmin, do take damage, although only a small amount, and are similarly pounded into the ground. In the first Pikmin game, this causes the creature to stop attacking and appear to relax; it will only attack again if Pikmin are plucked or if it is attacked.

The Mamuta is found at The Impact Site on even-numbered days (on odd-numbered days, the Goolix is encountered instead), starting on Day 8. In Pikmin, the Smoky Progg is thought by Olimar to be a larval Mamuta suffering from a birth defect, although this is just a theory.

In Pikmin 2, Mamutas are only found underground, and are more aggressive, attacking any Pikmin that approach them. They have less health than they did in the first game, yet their attacks have the same effect as before. A Mamuta inside the Frontier Cavern holds the Brute Knuckles, making it the only non-boss enemy that holds a piece of the Explorer's Friend Series, which constitutes the Exploration Kit.

"This seems to be a gentle, flower-loving creature, but if angered, it is fierce. Its mighty open-handed smack... It reminds me of the time back home when a mosquito landed on my head, and my wife tried to get it..."

"This creature seems fond of flowers, but only for their decorative properties."

"A mamuta cannot defeat a Pikmin, but it can pound the trooper into the ground with its heavy arms. In fact, one rock beast can bury several Pikmin with a single blow. After you defeat the Mamuta with flying attacks, be sure to pluck your buddies from the soil-their tops will be in full bloom."

There is no threat, only the problem of having to pick planted Pikmin, which can take a while without the Pikmin 2 exclusive Pluckaphone, although it can be troublesome if the Mamuta hits the captain, incapacitating him for a second or more. Throwing Pikmin onto it from a distance is often more effective than swarming, unless Olimar is accompanied by a large group of Pikmin. Attacking from behind is also advantageous. Don't use bomb rocks on it; they do very little damage.

Although very difficult, Olimar can defeat the Mamuta by attacking it from behind. However, it is recommended that Olimar uses Pikmin, as attacking the Mamuta alone is very time-consuming.

The same strategy for the first game applies here, except now there is less rush since they are now cave-exclusive enemies. Purple Pikmin work well for defeating the Mamuta. It should be noted that the Mamuta is easier to beat with Captains as well. 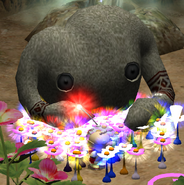 A Mamuta surrounded by Pikmin sprouts.

A Mamuta in the Creature Montage.

A transparent png of the Mamuta.