The Man-at-Legs (ダマグモキャノン) is a member of the Arachnorb family, and first appeared as a boss in Pikmin 2. It's one of the few bio-mechanical creatures featured in the game, having a mostly mechanical torso sheathed in metal with four spindly legs - three of them are black, organic and spider-like, while the other one is mechanical. Several exhaust pipes on its body continually emit smoke. Unlike other Arachnorbs, it has no flat footpads to stomp Pikmin with, Instead it relies on its speed, quickly skittering around the room to avoid being attacked. When agitated, the panels of its underbelly separate and a machine gun-like weapon extends out, tracking any nearby targets via a laser sight before rapidly firing a barrage of explosive rounds at whatever it manages to lock onto. However, the Man-at-Legs is not in control of this, the machine extends the machine gun, the Man-at-Legs is actually gentle under the metal.

Once the Man-At-Legs dies, fireworks sprays from its body before the entire creature violently explodes, quite unlike the other Arachnorbs, which simply disintegrate.

It is only found on the last sublevel of the Subterranean Complex, sublevel 13 of the Hole of Heroes and sublevel 2 of the Secret Testing Range in Challenge Mode.

"This species of the arachnorb family fuses with machinery at a crucial point in the maturation process, giving it the ability to fire energy bursts from the launcher beneath its orbular torso. However, the Man-at-Legs itself is not in control of this weapon. Instead, the mechanical portions of its structure appear to automatically acquire and attack targets. The Man-at-Legs has a gentle disposition, and as a member of the arachnorb species, it has no natural enemies. It is particularly difficult to understand why this species would develop such awesome offensive capabilities, leading to rumors among the scientific community that it was the machinery that approached the arachnorb and proposed the symbiotic relationship."

"Although the meat is a bit on the metallic side, the oil makes a mouthwatering gravy or lubricative vinaigrette."

"Lasers and machine-gun fire give the Man-at-Legs the edge over any other spiderlike creature. Seek shelter when the mechanoid is in firing mode, then toss Pikmin at its body. Only when the body sinks to it lowest point will you be able to hit it with purples." 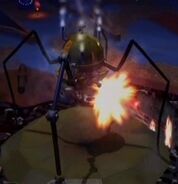 A Man-at-Legs in the Secret Testing Range, firing its weapon.

A dormant Man-at-Legs in the Hole of Heroes.

Olimar and Louie fighting two Man-at-Legs at once in an unused cave meant for enemy testing.
Add a photo to this gallery

Retrieved from "https://pikmin.fandom.com/wiki/Man-at-Legs?oldid=128303"
Community content is available under CC-BY-SA unless otherwise noted.