The Mandiblard Family consists of eight known species, two of which are known to demonstrate a degree of sexual dimorphism not uncommon to insects. As a whole, they have little vitality and are not especially dangerous, but like the Cloaking Burrow-nit, they are infamous for tearing apart nearby stick bridges which Pikmin have built. Due to their general inability to present any danger, these enemies are usually found in groups of 3 or more, and are always buried in the ground, appearing only when a Captain or Pikmin approaches close by.

Male Sheargrubs have a dark purple shell and large mandibles. They are capable of attacking Olimar and the Pikmin, but are not a serious threat, as they can only eat one Pikmin at a time. In Pikmin, when a Male Sheargrub has a Pikmin in its mouth, it is invulnerable to most attacks and can only be defeated either after it has eaten the Pikmin, or if a Pikmin is thrown directly onto its back. This was fixed in Pikmin 2, allowing players to kill them by any method, even if they have a Pikmin in their jaws.

Female Sheargrubs are a much lighter color than the males and have significantly smaller mandibles, making them unable to cause direct harm to you or your Pikmin, though they are still a menace for bridges. They can be ignored in most situations, perhaps only useful as a means of easy-access Nectar, which they will produce if killed while petrified.

The Swarming Sheargrub is a large Mandiblard that is somewhat similar to the Female Sheargrub in appearance, besides size and color. They are known to follow Pikmin from a distance, and can be a distraction to your Pikmin swarm. They can grow in size after consuming a dose of Nectar, and can weigh down objects.

Sporegrubs are tiny, poisonous species of Mandiblard found in the Ravaged Rustworks and Lushlife Murk of Hey! Pikmin. A mutated variety of Sheargrub, it is able to release a toxic gas on its body as protection and to guard its territory. One Pikmin can kill a Sporegrub, but if missed it'll release its cloud.

Speargrubs are a spiked species of Mandiblard found mainly in the Sparkling Labyrinth. Unlike the other Mandiblard, Speargrubs are unkillable, but are able to freeze for a few seconds if struck by a Rock Pikmin.

Shearblugs are semi-aquatic Mandiblards found in the Verdant Waterfront. like the Speargrub, it has spikes for defense but are exceptionally larger in size, and is able to curl up into a ball to defend itself. 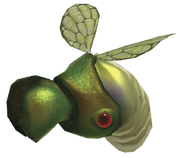 Shearwigs are enemies that appear in all three Pikmin games. The females of this species are never seen, as they spend nearly their entire life underground. The males have a dark green shell, sporting simple wings and large, sickle-shaped mandibles. They are slightly more aggressive than Male Sheargrubs and will fly to safety when their health descends to the yellow zone; up in the air, they regain health. One well-aimed Pikmin will bring a flying Shearwig down for good. Both Sheargrubs and Shearwigs will drown quickly in water, so luring them into a pool is an alternative strategy if you're short of Pikmin. Shearwigs deal the most damage to captains out of any enemy in Pikmin 2.

The Queen Shearwig is the hive mind of Shearwigs, and the fifth boss in Hey! Pikmin. The queen is a much larger version of Shearwig, pink, and mandibles resembling a drill. She is able to command a troop of Shearwigs to protect her from threats and attack prey for her.