Although Margarets themselves do not directly affect gameplay, disturbing a cluster of these flowers may sometimes reveal hidden creatures such as Honeywisps or Unmarked Spectralids.

"This plant's delicate yellow flowers often inspire waves of nostalgia, giving a bittersweet feeling to any who gaze upon them."

"Can be eaten fresh out of the soil, but it's much more flavorful when incorporated into a heavenly veggie lasagna." 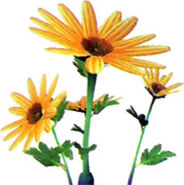 Artwork for the Margaret flower.