Olimar's family consists of his wife, his son, his daughter, and his pet, Bulbie. Since Olimar works for Hocotate Freight, it seems he gets little time to spend with his family. In Pikmin 3, he addresses this by stating that he will take his whole family on a vacation when he gets home. It is also seen that Olimar's family has no knowledge of money, because they spend Olimar's bonuses on things like trips to the hot springs, and his son states that he should send in a Bonus check for a offer in a SPAM email.

On Planet Hocotate, Olimar is married and has 2 kids. Olimar's wife is a woman who cares much about her kids. When Olimar's special bonuses arrives at his house, she often uses the money to buy her kids what they have been wanting. However, it seems that money can make the best of her. Whenever the bonuses come in, she seems to get stricter on her kids, and might be lacking in common sense, as Olimar's son states that she wants to send Bulbie to the circus. It is stated that she goes to beaches and theaters all day until the kids come home. After she wastes money buying lottery tickets, she realizes the mistake she made, and loosens back up into her former self. After time has passed, she pleads for Olimar to come home (very lovingly), telling that there is PikPik carrot soup waiting. According to Olimar's Entries in Pikmin 3, he seems to trust her more than Louie. According to the Memento of Love (Princess Peach Amiibo) description from Hey! Pikmin, almost every statue Olimar see reminds him of her.

Olimar's Wife as seen in the Mail of Pikmin 2.

Olimar's Wife in the Mail of Pikmin 2 once the debt has been repaid.

Olimar's Son is a standard kid. He seems to be fascinated by his father's adventures, and seems to envy him. He enjoys games more than studying, in contrast to Olimar's daughter. Judging by some of his mail, he must be in his teenage years. He always yearns for his father to come home. He doesn't like it when his mother becomes strict because of the bonuses, and tells his father to come home to fix the mess. He seems to be easily won over, as he asks if he should send in Olimar's bonus check for a SPAM email. 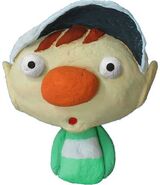 Olimar's Son as he appears in the Mail of Pikmin 2.
Add a photo to this gallery

Olimar's Daughter is seen only wearing a pink suit with a hood of sorts, and has little personality. In her e-mails she sends in Pikmin 2, she discusses briefly how she is being pressured to become a proper lady, and asks Olimar what she should do. She also speaks about how Olimar's Wife has changed during the absence of her husband. She attends some school on Hocotate, based on the fact that her mother gets strict about her writing and studying. Olimar also states that he “fears for his wallet“ as his daughter comes more and more dissatisfied with her plastic ring.

She also appears as a sticker in Super Smash Bros. Brawl. The sticker increases Pikmin attacks by 7. 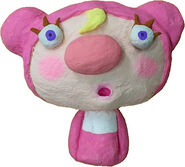 Olimar's Daughter as seen in the Mail in Pikmin 2.
Add a photo to this gallery

Bulbie is Olimar's pet. He is most likely the Hocotatian form of a dog. He is briefly mentioned in Pikmin, and is described to physically resemble a Bulborb in Pikmin 2. According to Olimar's Son, he gets thin after Olimar's Wife forgets to feed him, and he later eats many Pikpik Carrots. It is also mentioned that Olimar's Wife threatens to send Bulbie away to the circus. Bulbie is also mentioned in the mail of Pikmin 2, as Olimar's son asks him if he battles creatures just like Bulbie on the foreign planet.

Three members of Louie's family are alluded to in Pikmin 2: his father, his aunt, and his grandmother. Only his grandmother speaks at all through mail, and none of them have nearly as much development as the members of Olimar's family. All of them, however, seem to be quite fond of bugs.

Louie's grandmother shows a lot of love for Louie, as well as a lot of concern as he is missing for part of Pikmin 2. In her mail, she describes fond memories of Louie as a boy and how bugs loved him. She also talks about how Louie loved to eat bugs and Pikpik carrots, and she apparently sends preserved bug food with her mail, though it is never actually seen. After all the treasures in the game have been collected, Louie's grandmother sends one final message, in which she shows her pride in how Louie has become an "extraordinary man".

Though it is never mentioned in-game that Louie's grandmother is his grandma, in the game's files the icon for her mails show the file name of luibaba, "baba" meaning grandmother, and "lui" possibly referring to Louie.

Louie's father has no personality and is mentioned only briefly in an e-mail from Louie's grandmother:

"Louie, I heard that you completed your task! Congratulations! My little Louie has become an extraordinary man! How about visiting your dad? I've got bug juice!"

From this, it can at least be assumed that Louie's father is the son of his grandmother.

Louie's Aunt is only briefly mentioned by The President, who refers to her as Louie's "aunty". She is mentioned to have sent some cookies to The President, but no other notes are made of her.

"Louie, your auntie sent me some cookies. Now, I only meant to taste one, but... then I ate them all. Sorry. To make up for it, I shall officially make you a Cookie Specialist."

The President has only one known member of his Family, his wife.

The President's Wife is quite a sassy woman. She reveals to constantly be yelling at her husband for loafing around. In her mail, she reveals to be the "real boss" of Hocotate Freight, and sends the President mail stating that his report is wrong. It seems that the Ship is sending her a report at the end of every day, and knows that his wife is the real boss. Once all the treasures are retrieved, she thanks him and says she "sees him a new light". This infers that she is very important about work.

An alternate photo for The President's Wife as seen in the Mail of Pikmin 2.
Add a photo to this gallery

Alph has only one important member of his family: his grandfather, Drake. Alph talks about him sometimes while aboard the S.S. Drake. He also has many siblings.

Very little is known about Drake. All that is known about him is that he designed the S.S. Drake and that he knows about some of Hocotate's history. Other than that, it is said that Alph spent a lot of time with his grandfather as a child. As a result, he looks up to Drake as a role model.

Alph also has 12 older brothers, one older sister, and one younger brother. Alph mentioned how his older sister used to always share food with him even when it was scarce. Other than that, Alph doesn't talk about them much.

Brittany also has only one known member of her family, who is Auntie Bea.

Auntie Bea is Brittany's aunt. In the American/NTSC version of the game, she is known for her famous fruit pastries on Koppai. Auntie Bea's hair is similar to the color of the Dusk Pustules. The game states this as a 'rebellious streak', possibly saying most Koppaites don't have that color of hair. Auntie Bea's nose is similar in shape to the Tremendous Sniffer, and she is the envy of the family because of her nose. She treated Brittany with lots of love, giving her sweets and such in the European/PAL version, and Brittany likes her because of it.

In the NTSC version, Brittany mentions that Charlie has a pet dog when she takes notes on the Dawn Pustules. Charlie apparently painted his dog to match his favorite color -- the shade of green seen on his spacesuit. Unlike with Bulbie, this pet is directly stated to be a dog, so Koppai must have animal species similar to those of Earth, at least in theory.

In the PAL version, there is no mention of a dog at all. Instead, in one "Talk" section Alph asks Charlie who "Elizabeth" is. Charlie then explains that Elizabeth is his pet duck with which he shares a strong bond with and that he considers her his soulmate. Again, this pet is directly stated to be a duck, so together with Charlie's Rubber Ducky and Brittany's mention of Geese, Koppai must have animal species' that closely resembles those of Earth.

There are five characters in Pikmin 2 that send spam e-mails after the debt has been repaid. The icons for these characters are all shady, leaving their appearances mostly unknown. They all attempt to advertise one thing or another and include the address of either pikmin.com or nintendo.com at the bottom of their messages.

The first spam message the player will receive is from a person who is apparently very lonely and wants a friend to listen to their troubles. Based on the shady outline, this character is probably female.

The second spam message is from someone talking about saving tons of pokos through bargains and cut-rate prices. Olimar's Son also mentions that he received a similar message, and asks Olimar if he should send his bonus check.

The third spam message is received after Louie has been recovered. The sender talks about some device that accordingly "slices... dices... plays videogames... sends mail... wraps gifts" and "cures snoring".

The fourth spam message talks about changing jobs, and finding "the new you". It advertises an unseen company known as Hocotate Whiz.

The fifth and final spam message is received after all the treasures have been collected. It advertises music. It speaks of "Pikpik's greatest hits", implying that there is a band on Hocotate by the name of Pikpik.

Retrieved from "https://pikmin.fandom.com/wiki/Minor_Characters?oldid=126906"
Community content is available under CC-BY-SA unless otherwise noted.