The Mollusking family consists of two known species. Attached to the backs of these large, slug-like mollusks is a frilly appendage resembling a berry or a flower bud which functions as the creatures' gills. Such an outlandish means of respiration may seem far-fetched, but a real-world order of snails and slugs called nudibranchs breathe through colorful frills on their backs. 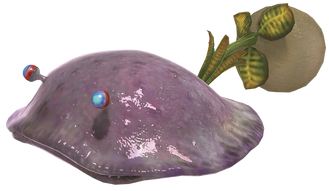 Toady Bloysters are slug-like creatures within the Mollusking family. They creep along the ground in search of food, and upon discovering Pikmin, they emit a loud call reminiscent to that of a cow, then lash out with 5 to 6 adhesive pseudopodia-like tentacles. Any Pikmin hit by the tentacles stick, and are ingested if the Bloyster is not killed before it can finish "chewing."

As slow as they may be, a Bloyster is capable of causing a very large and sudden drop in the number of Pikmin a Captain has at their disposal, should they be careless enough to allow the Bloyster the chance.

They reappear in Pikmin 3 where they have undergone appearance changes to be represented in HD. Their tongue is changed from seven separate ones to one blue tongue that splits into six. They are now vulnerable on their back as well, but attacking the bulb deals more than double damage. Also, instead of shaking Pikmin off, they release a cloud of poison to scatter them.

The Ranging Bloyster is a large form of the Toady Bloyster, named for its longer tentacle mouthparts and bigger size. This creature is difficult to beat because it tracks your active pilot. Whatever color your captain's antenna beacon is, the eyes and tail of the Bloyster will change that color, also a different sound is made for each color (red and blue), letting you know it is after you. The best way to beat it is to lead one of the pilots behind the creature and then take the other pilot with Purple Pikmin (if applicable) while the Bloyster faces the divertive pilot and start throwing them on its back or tail while the Bloyster can't face you. If it turns your way, switch to your pilot leading the diversion and wait for the Bloyster to face him again, then switch to your attack squad and repeat if necessary, eventually, you should take the annoying beast down. The Ranging Bloyster has a particular interest in lights and shiny objects, which is why it will chase after your pilots' light beacons.

Retrieved from "https://pikmin.fandom.com/wiki/Mollusking?oldid=128316"
Community content is available under CC-BY-SA unless otherwise noted.