Start a Wiki
A Nectar egg is a white, ovulate object in Pikmin 2 and Pikmin 3. These are the eggs of some insect, but it is unknown what insect these eggs come from. They are found in specific areas above ground in both games, as well as random areas in the caves of Pikmin 2. They usually contain nectar, but may also contain sprays, Mitites or bomb rocks. It seems that the eggs seen being held by Honeywisps may actually be connected to these ones, as they function identically.

To destroy a Nectar Egg, simply throw a Pikmin on it or punch it a few times with your Captain. The eggs pose absolutely no harm to either one. However, in Pikmin 2, it is advisable to throw a Purple Pikmin onto a nectar egg, as this will immediately break the egg and all contained Mitites will be killed, if there are any. In Pikmin 3, Rock Pikmin destroy eggs on impact much like Purples, but there is not risk of Mitites, so it's not as strongly recommended.

There are no nectar eggs in the first game, but they can be found in many places in Pikmin 2; each number represents the number of nectar eggs in a group. Also, note that nectar eggs may appear in almost all underground locations. Either on the ground or falling from the cave ceiling. In Pikmin 3, eggs still appear, but not as conveniently as they did in Pikmin 2. They can also be found under Flukeweeds. Flukeweeds that hold nectar eggs only require one Winged Pikmin to uproot.

"Smash one of these small objects to reveal a puddle of Nectar or Ultra Spicy Nectar."

Nectar in an egg in Pikmin 3. 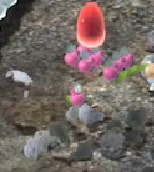 A dose of Ultra-Spicy Spray in an egg in Pikmin 3.

Nectar Eggs in an unused cave in Pikmin 2.

A bunch of Nectar eggs in Pikmin 3

A Nectar Egg about to break in Pikmin 3
Add a photo to this gallery
Retrieved from "https://pikmin.fandom.com/wiki/Nectar_Egg?oldid=125486"
Community content is available under CC-BY-SA unless otherwise noted.