The Peckish Aristocrab[1](カニタマ) is a crab-like enemy in Pikmin 3. Its overall appearance resembles a green and purple bulb of garlic with 4 legs coming from underneath, and two claws on each of its sides, one of them being extremely small, while the other is much larger with transparent pincers. It has two round yellow spots on its cheeks, which look like eyes, while its real eyes rest on stalks that protrude out from the top of its head. It has a large mouth with a serrated lower jaw and long purple tongue. The creature mainly rests in a motionless position, clacking its large pincers, but can detect Pikmin's presence from afar, and it will quickly scuttle sideways onto the player's path when they enter the area, circling them in order to get in their way.

When Pikmin are thrown at it, the creature is capable of maneuvering its massive claw to shield itself from the thrown Pikmin. It can also defend itself by blowing bubbles at the Pikmin, which can trap them inside the bubbles, making them float around for a long period of time until the bubble pops. This can trap captains as well. It attacks by grasping multiple Pikmin with its claw and dropping them into its gaping mouth. It can also stab the ground with its claw to attack.

"Found near water, this creature will grab Pikmin with pincers. It can also blow bubbles that temporarily trap small prey."

"The Peckish Aristocrab is a fairly large amphibious creature. Like the Waddlepus, this enemy uses bubbles to capture nearby attackers. In addition to this defensive ability, the Peckish Aristocrab uses its large claw to snatch up multiple enemies during a single attack.

"This crab-like life-form from Pikmin 3 traps Pikmin in bubbles. When it appears in the Garden of Hope stage, it creates a path of destruction from one end of the stage to another, but if the central bridge isn't there, it'll just fall right down. You can tell where it'll appear by the telltale appearance of bubbles, so watch out!"

Rock Pikmin are capable of breaking the Peckish Aristocrab's larger claw, since it is very crystal-like in appearance; it is more durable than a nodule, but hitting the claw with Rock Pikmin causes small pieces to fly off. Eventually, the claw will break, rendering the Aristocrab unable to snatch Pikmin, it's only means of defense being blowing bubbles and shaking off attacking Pikmin. Should the Aristrocrab grab onto any Pikmin, throwing Rock Pikmin at its claw should be enough to release its grip on them.

An alternate strategy is to have the Aristocrab eat a Bomb Rock. To pull this off, simply have the creature snatch a Pikmin carrying the Bomb Rock. The Pikmin will break free, and the Aristocrab will eat the Bomb Rock. When it does, it will be killed instantly, causing its eyes and legs to shrivel away and its claw to explode into crystaline shards, leaving only the body for salvaging.

Another strategy is to quickly get behind it and bombard it with Rock Pikmin, which can kill it in only a few seconds. 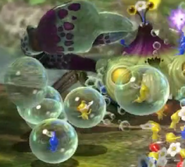 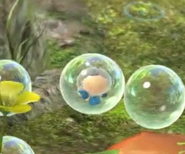 Even leaders can be trapped inside the bubbles!

Alph and an army of Pikmin are attacking a Peckish Aristocrab.

The Peckish Aristocrab in the Pikmin 3 US TV commercial.

The Aristocrab eating a bomb rock held by a Pikmin.

A Peckish Aristocrab in SSBU