Pikmin 2 is the second game in the Pikmin series, released in 2004 for the Nintendo GameCube. It takes place directly after Pikmin, whose ending shows Captain Olimar as he successfully escapes the Planet of the Pikmin. Unlike the first game, this game includes a 2-Player mode, and it also features two new types of Pikmin, as well as the Pikmin-esque creature Bulbmin. Its sequel, Pikmin 3 was released nine years later.

Upon returning to Hocotate after his adventure on the planet PNF-404, Captain Olimar meets his employer and a newly hired, supposedly inexperienced employee named Louie. Olimar learns that Hocotate Freight is in a massive debt of

x10,100 due to the loss of a shipment of Golden Pikpik Carrots, a situation brought about by Louie; Olimar's ship, the S.S. Dolphin, is consequently removed and sold in order to repay some of the debt, at which Olimar drops a bottle cap in shock, brought back to Hocotate as a souvenir for his son. The Ship proceeds to absorb the bottle cap and values it at

x100, leading to the President sending Olimar and Louie back to the Distant Planet to collect more treasures. When they arrive Louie falls out of the cockpit. Luckily, Olimar reunites with Louie beginning their quest for treasure.

The gameplay of Pikmin 2 is similar to the series' first game with a few changes. The Y Button no longer opens up the map of the current area anymore; instead, it is accessed via the start button. The Y Button is now used to switch control between two currently available pilots, allowing the player to multi-task, introducing a strategic aspect. Unlike the first game, this one has an endless amount of days in which to complete all objectives. You also cannot get a game over by Pikmin extinction or losing your health. At the end of a day, the nocturnal enemies of the planet awaken, posing an impossible threat, and any Pikmin left behind are killed. After the ship has risen into a low orbit, it is possible to view the treasures salvaged that day, the current Pikmin count, and an E-mail sent by various characters. There are two new hazards introduced in Pikmin 2: electricity and poison. The majority of obstacles are present again, along with new obstacles, such as electric gates and Paper Bags. Red, Yellow and Blue Pikmin are stored in Onions, while purples and whites are stored in the ship's hull, due to their being produced through appropriate Candypop Buds, thus having no respective Onions. There is a general consensus that the overall atmosphere of Pikmin 2 is different to that of the first game; the feelings of being rushed and isolation prevalent throughout in Pikmin have been lessened. In the first game, Captain Olimar was stranded, alone, on a foreign planet, with a limited number of days to survive. It can be concluded, then, that it is Pikmin 2's absence of a time limit, the addition of Louie as a companion and the daily E-mails that achieve this. The Japanese version of Pikmin 2 featured e-Reader compatibility. Sets of Pikmin e-Reader cards were sold which unlocked new mini-games. This feature was not available in other regions, because the peripheral had been discontinued. The option on the menu of these versions was removed entirely. Also, when the e-cards were first announced for Pikmin 2, many people thought it was an announcement for a GBA version of Pikmin 2.

Main article: Challenge Mode (Pikmin 2)
Challenge Mode can be accessed through the title screen. It is unlocked by retrieving The Key from the Citadel of Spiders in Story Mode. Challenge Mode consists of 30 unlockable caverns, most of which contain multiple sublevels. In each sublevel, a duplicate version of The Key must be retrieved with a predetermined number of Pikmin, and within a certain time limit. Scores are kept on each level. The appearance of a level's icon depends on the status of the level;

Yellow Dot: A cave the Player hasn't yet unlocked

Leaf : A cave the Player hasn't yet completed

Flower : A cave the Player has already completed

Pink Flower : A cave the Player has completed with no Pikmin casualties

If a Player manages to earn a Pink Flower on every level of Challenge Mode, the secret cutscene, Louie's Dark Secret, is unlocked.

The Pikmin from the first game haven't changed, except for the Yellow Pikmin, who are no longer able to handle Bomb Rocks (which is possibly because they are all larger and heavier in this game), but are instead immune to the electrical hazards in the game. Mushroom Pikmin are not seen in Pikmin 2, due to the absence of the Puffstool, and there are three new kinds of Pikmin that can be discovered in underground areas, which are:

Main article: Purple Pikmin
Purple Pikmin are the first underground Pikmin and the second kind of Pikmin discovered, and are found by using the Violet Candypop Bud in the last sublevel of the Emergence Cave. They have a bulky appearance and have visible hairs on their head. They are needed to carry the Spherical Atlas in the cave because purples have 10 times the strength of an ordinary Pikmin and the treasure's weight is 101. Their great weight means that they shake the ground upon landing from a throw, which can temporarily stun nearby enemies of most species that are on the ground. Purples are also the strongest type of Pikmin, dealing the most damage in attacking enemies. They possess an advantage over other Pikmin when dealing with some bosses: for example, they can harm Giant Breadbugs and can make a Waterwraith vulnerable to attack by any Pikmin.

Main article: White Pikmin
White Pikmin are the second underground Pikmin and third type of Pikmin found in Pikmin 2. To find the game's first White Pikmin, the player must visit the White Flower Garden and progress to sublevel three, where the Ivory Candypop Bud are. They are smaller than other Pikmin and have red eyes. The poison clouds produced by poison pipes and Doodlebugs will cause Pikmin to choke, but White Pikmin are immune. These Pikmin can locate buried items on their own, making them essential for unearthing buried treasure. They are also the fastest of the Pikmin, both in carrying items and keeping up with the player. When eaten by an enemy, they poison the enemy and cause it to lose some health; smaller enemies are killed instantly. These Pikmin are also the weakest in terms of attack power, being outclassed by every other Pikmin type, though because they attack faster this is balanced out.

Bulbmin are the last type of Pikmin you may find. They are found in three caves: Submerged Castle, Frontier Cavern, and Hole of Heroes. Bulbmin may look like Bulborbs but they can be used like, and act similarly to, any other Pikmin. To retrieve small Bulbmin, one must defeat the larger Bulbmin and then call the small ones with a captain's whistle. Bulbmin are immune to all the hazards on the planet except physical threats posed by enemies, but are slower and weaker and can't leave underground areas. They are a good choice to use in Candypop Buds, due to the fact that they don't return above ground with you. Bulbmin are known as all the types of pikmin. (Excluding Purple Pikmin)

Pikpik Carrot Pikmin are Walking Pikpik carrots that can only be obtained by a hack. They are poorly textured and ineffectual when thrown. They can only encountered through the challenge mode of the game.

The following are the above ground areas in which it is possible for the ship to land:

The most notable feature, as with Pikmin, is the different control scheme, which allows pointing at the screen to aim the cursor. This version also has widescreen support and the graphics are slightly enhanced over the GameCube title. There are no major gameplay differences, it is just an enhanced version of Pikmin 2. You can throw Pikmin further, and it is possible to see colored silhouettes of Olimar and Louie through solid objects. Wollywogs were renamed to Wollyhops in the PAL release due to wog being a derogatory term in Europe. Also, Totaka's Song (Wait 15 minutes at treasure cleared screen) has been removed.

The title screen for Pikmin 2. 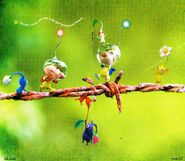 Art from the Pikmin 2 Manual.