Pikmin 3 is the third installment in the Pikmin franchise, which is a real-time strategy video game developed and published by Nintendo for the Wii U.

Elements new to the series include two new Pikmin types, the ability to throw leaders, using three leaders at a time, several different control schemes, and a handy information terminal, the KopPad. It was the first original entry in the Pikmin franchise in 9 years, since the original release of Pikmin 2 on the GameCube in 2004.

On Wednesday August 5, 2020, a port of Pikmin 3 was announced for Switch, as Pikmin 3 Deluxe, including all DLC, new additional missions, co-op multiplayer, and new difficulties. The release date was October 30th of the same year.

The planet of Koppai is facing an inevitable doomsday due to booming population growth, and a "general lack of planning" that resulted in the depletion of all food resources. They send unmanned scout vessels, called SPEROs, out into space to search for a planet containing edible matter. They were losing hope when the SPEROs returned with no data, the final one arrives with coordinates to PNF-404, better known as the Pikmin planet, which the Koppaites believe to be an uncharted planet.

Three explorers are sent to PNF-404 to retrieve seeds to bring back and cultivate on Koppai; Alph, a young engineer, Brittany, a botanist, and Charlie, the captain of their ship, the S.S. Drake. As they approach the atmosphere of PNF-404, the Drake malfunctions and ejects the three explorers before plummeting to the surface of the planet.

Charlie wakes up in the Distant Tundra, where he finds a group of wild Yellow Pikmin which he quickly befriends. However, this friendship is cut short when Charlie enters a cave and is swallowed by a large, invisible creature...

Alph wakes up in the Tropical Wilds, where he discovers a red Onion and its Pikmin, which he quickly uses to help him find the S.S. Drake, which has landed safely, aside from missing a component that renders it incapable of activating its Warp Drive.

Brittany lands in the Garden of Hope and finds herself trapped until Alph rescues her by using the newly-discovered Rock Pikmin. Later they arrive at the Distant Tundra where Brittany has ejected from the Drake again due to a storm. She lands in a cave and finds Yellow Pikmin. With the yellows, she escapes the cave and reunites with Alph. Shortly after this, the duo fight the Vehemoth Phosbat, and after defeating it, they free Captain Charlie. Charlie reveals that he found a data file stating that Captain Olimar has the Cosmic Drive Key. The fully reunited team looks for signals in search of Captain Olimar.

Later on, the explorers began to receive signals from an unknown source at the Twilight River. This eventually leads them to find that Louie has crashed onto the planet, whom they rescue from the Scornet Maestro. The day after rescuing him, he steals all their juice and tries to escape to The Ship, only to be eaten by a Quaggled Mireclops and rescued again by the three explorers. After this second encounter, he is tied up to prevent him from causing the leaders trouble again, and he gives them the coordinates to the Formidable Oak, where his colleague is being held captive.

Upon arriving at the final area, the explorers learn that Louie's colleague, Captain Olimar, was sent to the planet by Hocotate Freight to try and find more treasure in order to buy back the S.S. Dolphin, but ended up crashing and completely destroying his ship. Alone on the surface, he was abducted by a large, overprotective creature called a Plasm Wraith, which tries to mother him and refuses to let him go. Eventually, the three explorers free Olimar from the creature and escape with him on the S.S. Drake as the Plasm Wraith screams at them for taking Olimar away.

In the game's closing moments, the Narrator implies the crashing of both ships was not by accident, and Alph also states that Louie was accidentally left behind yet again. At the end of the credits, the Pikmin are seen singing and coexisting with both themselves and the creatures of the Pikmin planet. However, this is interrupted when the Pikmin spot a flaming object crashing onto the surface of the planet...

Shigeru Miyamoto hinted a new Pikmin game in a July 2007 interview with IGN, saying "I certainly don't think we've seen the last of Pikmin. I definitely would like to do something with them, and I think the Wii interface, in particular, is very well suited to that franchise." A later CNET.com interview in April 2008 reported that "For now, Miyamoto looks ahead to other projects for the Wii, mentioning his desire to continue the Pikmin series."

The game was then confirmed at E3 2008 during Nintendo's developer roundtable, in which Miyamoto stated that his team was working on a new entry in the series. However, details concerning gameplay and development were left unmentioned. At Miyamoto's roundtable discussion at the E3 2011, Miyamoto stated that Pikmin 3 development was moved to Wii U, the Wii successor. He thought the HD graphics for the next system and its special screen-based controller would work better for it.

On June 5, 2012, Pikmin 3 was shown at Nintendo's press conference at E3. It showed off some of the new gameplay aspects including the new rock Pikmin and the GamePad controls. It was said that it would be released around the same time as the Wii U, but its release was later delayed until mid-2013. When questioned about the presence or absence of the purple and white Pikmin types featured in the second game, Miyamoto stated that "They're in there somewhere, just hidden...". A video released from Nintendo Direct confirmed that they would in fact be in the game, but only in the game's Mission Mode and Bingo Battle.

In a Polygon interview, Miyamoto stated that he plans to have a series of animated Pikmin shorts released on the Nintendo 3DS prior to Pikmin 3's launch. While the shorts went unheard of for months after the game's initial release, they were eventually brought back up again by Miyamoto a year later, and eventually were announced to be released on November 5, 2014 on the Nintendo eShop for $4.99.

While Pikmin 3 contains many recurring game play elements from earlier games in the Pikmin series, it also introduces some new, complex mechanics that make it stand out from its predecessors:

In Pikmin 3, the Challenge Mode, now called Mission Mode, features three modes to play: Collect Fruit, Battle Enemies, and Defeat Bosses. Each challenge is 5-15 minutes long and provides the player with a set number of Pikmin.

Bingo Battle mode is the Pikmin 3 version of the 2-P Battle Mode from Pikmin 2. In this mode, Two players, who play as Alph and Olimar, are each given a bingo card filled with enemies, fruit, and marbles. The players must strategically find ways to not only collect the items needed to make a bingo, but also to ensure their opponent cannot win.

The Wii U Pro Controller will allow for a more "traditional" feel to controlling the game. It will work the same way as the Gamepad + TV scheme, but the HUD will be displayed on the TV. It will play similar to the GameCube controller from the GCN versions of Pikmin and Pikmin 2.

This game uses the Wii Remote Plus and Nunchuck for motion controls, while the HUD and overhead map is displayed on the Gamepad's screen. In this scheme, the gamepad acts as a monitor that the player can configure and utilize to better accommodate themselves with the game's areas.

The game's main controls use the Wii Remote Plus and Nunchuck. The Wii U Gamepad always displays a full overhead map and a HUD, allowing for a less-cluttered screen. Using the precise movements of the Wii Remote Plus, the cursor can be aimed specifically at enemy's weak points.

The game supports Off-TV play using only the Wii U GamePad. Using this control scheme, the game can be played in a more mobile, wireless form. The left analog stick can be used to walk while the right one will move the cursor, which will make the gameplay similar to the original GameCube versions of the first 2 games.[1]

This mode was added via an update released on May 29th, 2014, and uses the Gamepad-only control method. But instead of using the buttons of the gamepad, the touchscreen becomes fully integrated and replaces all button functions aside from L, which functions as the new whistle/pluck button. In the new control scheme, the controls are very similar to that of Pikmin Adventure's controls, as Pikmin are now thrown by simply tapping the screen at their desired point. There are new features on the GUI that allow for the player to easily switch between captains, manage Pikmin, use Ultra-Spicy Spray, and use the KopPad's apps.

Like all Wii U Software, Pikmin 3 has a Community for Nintendo Network Users to make posts about the game. All users can make posts, even those who don't own the game.

Using the KopPad, it is possible to take highly-detailed pictures from the perspective of a Pikmin using the Wii U GamePad. You can then share your pictures over Nintendo's Miiverse service, on the Pikmin 3 Community.This feature is no longer available after Miiverse shut down on November 7th, 2017.

The new Pikmin featured in Pikmin 3 have lavender-colored flowers and are unique in the sense that they are named after their abilities and appearance, rather than their color. Two new Pikmin types are in the game.

They take on the form of small polished pebbles, rather than plants. They are immune to attacks involving blunt force, such as Crushing or Piercing. When thrown, they deal with a large amount of damage. They are used to destroy crystalline obstacles.

Main article: Winged Pikmin
They are small, pink Pikmin resembling bees that are capable of flight. This makes them immune to ground hazards, such as bodies of water, as they will simply fly over them. They are weak in battle.

Nintendo has so far offered three DLC packs, all for either Battle Enemies! or Collect Treasure! 2 of packs are available for £1.79 | $1.99 | €1.99 and add four stages to the challenge mode. The first offered remixes of previous Mission Mode stages, while the second one offered stages based on locations from Story Mode, can be played cooperatively or solo, and include support for online leaderboards. One map per DLC pack is free to download.[2]

The third pack of DLC, and possibly the last, was released during the holiday season. It cost £4.79 | $4.99 | €4.99. It featured stages that were (mostly) not in nature but rather was based on objects made by man. For example, some stages were an abandoned construction site, a living room decorated for Christmas, and a factory. One stage, Forgotten Cove, is actually a reskin of The Forest Navel, most likely due to the fact that it did not appear as part of another stage in Pikmin 2. The Fortress of Festivity stage is available for free upon updating the game. 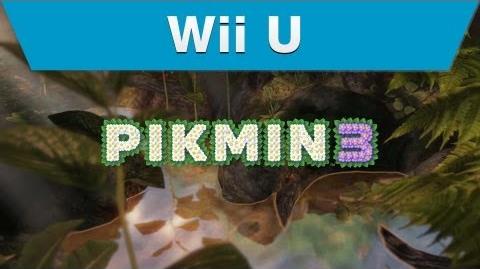 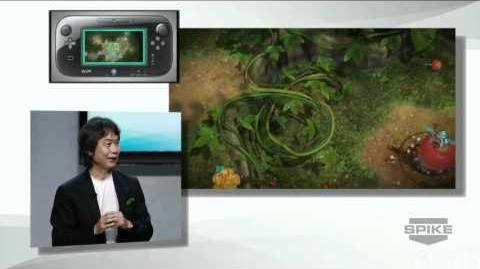 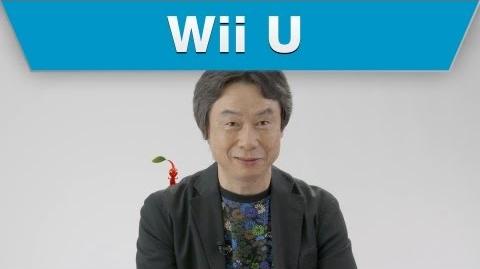 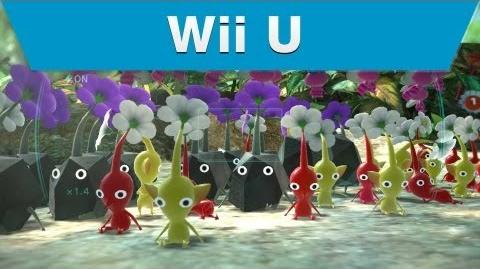 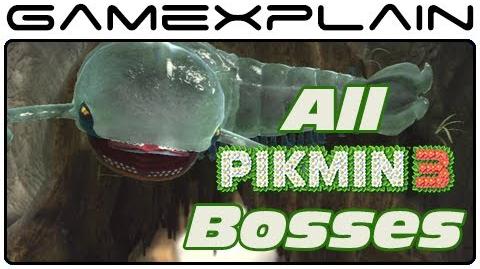 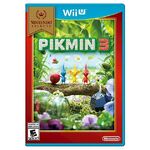 Old logo for the game.

The prologue as depicted on the official pikmin 3 Japanese website.

The official back of the game for the Japanese Pikmin 3

The official side of the Japanese Pikmin 3 box. 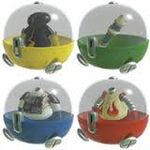