Pikmin 3, like other games, had a Beta version that never made it to the public. While no one has been able to go into the game's files to get unused content as of now, some Beta Elements that never made the light of day are known by looking at early trailers and footage. Hopefully, over time, unused data will be able to be observed from the game's disc itself.

Brittany had a minor change. In the Beta Version, Brittany's suit was yellow, and her concept art was as well. In the final version, her suit was changed to Red. Her original concept art also lacked glasses, which she has in the final game. 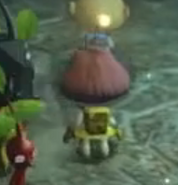 Brittany in her yellow suit in the Beta version of the game.
Add a photo to this gallery

There was one character that never made it into the game in any footage whatsoever, and was scrapped. He was showed off at E3 2012, and all that was underneath him was D. With an interview with Miyamoto, he stated that there were 3 captains playable at one time, suggesting Character D was scrapped, since he was never shown in any footage. Since Alph, Brittany, and Charlie all had the first letter of their name under their art at E3 2012, it is sometimes suggested by fans that the characteristics of Character D were given to Drake. It is unknown if this is true, but it is a faulty theory because Drake shows little character traits. A possible reason for the scrap could've been due to the constant switching around between characters, and adding a fourth character would've added to the chaos. Also if one looks at Character D closely, he seems to bear a striking resemblance to Louie.

Olimar, Louie and the President

As shown in images of several exploration notes in the Controls section, the game probably wasn’t supposed to have Alph, Britanny or Charlie in the game at all, with all of the 3 playable characters from Pikmin 2, Olimar, Louie and the President, playable instead.

In the original introduction of Pikmin 3, the logo contained a 3 made of violet flowers, to resemble the flowers of the Rock and Winged Pikmin.  In the final game, these flowers were changed to orange, possibly to represent Ultra-Spicy Spray. Also, the earliest footage of the game showed that the game was originally much dimmer than the final version, although this was most likely due to the fact that the lighting engine probably wasn't complete at the time it was shown.

In an early build of the game, the scan feature would cause the camera to enter a tilt-shift mode to focus only on the creature, and the creature would highlight in blue. The name of said highlighted creature was then displayed in simple blue text above it. This was greatly changed in the final game, which displays the name in a box in the lower right corner. This name is surrounded by strange characters, presumably of the language of Koppai. With the update released on May 29th, 2014, the scanning featured two new images on the left side of the screen. One shows how to make the Pikmin charge, and the other shows how to cancel the lock-on. The images shown correspond to the controller that is currently in use.

The beta version of Scanning.

The Scanning GUI in the final game.
Add a photo to this gallery

Originally, the whistle in Pikmin 3 had a smaller radius than in the past two games, and lasted for a shorter length of time. This was later changed to be slightly larger and longer, and included the ability for the Whistle to call Winged Pikmin by raising off the floor after fully expanding to create a cylindrical beam of light.

In the early footage shown of the game, the captains were first shown to have the ability to toss one another to access new locations. At this point in development, the captains were thrown much higher than they are in the final game. This change was most likely made to rid the game of some areas where players could easily break the barriers.

In the earliest footage shown of Pikmin 3, Rock Pikmin had a slightly different appearance, with slightly darker coloration and dark-coloured limbs. They also had made different sounds that sounded like lower-pitched versions of common Pikmin sounds. Each Rock Pikmin was also shaped slightly differently (e.g. some were shorter but wider). This made them seem more like real rocks, but the feature was removed in the final game.

Rock Pikmin in the E3 2012 demo. Some are shaped differently.
Add a photo to this gallery

In the earliest footage of Pikmin 3, Crystals were much more opaque. In the final game, they were changed to be completely transparent.

Crystals, as they looked in the game's early production.

Crystals, as they appear in the final game.
Add a photo to this gallery

In the 2012 demo of Pikmin 3, the Insect Condo was shown as one of the fruits returning from Pikmin 2. In this footage, it required only 8 Pikmin to carry it, as opposed to the 10 required in the final game.

In the E3 2012 demo, the Medusal Slurker required 7 Pikmin to carry, while in the final game, it can be carried by 6.

In the 2012 demo for Pikmin 3, the Golden Sunseed was referred to as the "Combustion Berry", sharing the same name as a fruit treasure that appeared in Pikmin 2.

In early footage the Pyroclasmic Slooch was one of the first new enemies revealed, and its name was instead "Pyroplasmic Slooch", a one letter difference from its current name.

In the E3 footage of the beta of Pikmin 3, there was an area shown off and was seen as a very water and log based area, this area did make some appearence in the game however, for example it is seen in the title screen and it can be seen on the map screen before choosing where to land.

This unused area also is represented in mission mode as the Shaded Garden, it may seem as though, with garden in the name that it was a representation of the Garden of Hope, but the Garden of Hope has almost no connections to logs at all, and the unused stage had a lot of connections. The unused area most-likely was going to contain Blue Pikmin as the species found and it is also probable that the Quaggled Mireclops, a very marsh-like boss, was going to be the main boss of the area.

It was likely scrapped to avoid dragging out the game due to the abundance of Lilypads, and making the game far longer to complete.

A part of the unused area

An image of the unused area, notice that there is alot of water.

A throwing puzzle in the unused area, notice the logs and lillypad.

An image of the unused area showing the characters riding a lilypad down the stream.

Another image of the player riding the stream.

An image of the player throwing Brittany across the logs in an early puzzle.

An image of the beta title screen which gives a good look at the area's layout.
Add a photo to this gallery

A fat slug-like enemy with a purple body, a yellow striped back, yellow stomach, three green eyes on each side, two long antennae and a circular sawteeth mouth. The texture is larger than the usual Pikmin 2 textures, but smaller than the usual final Pikmin 3 ones. This enemy is roughly the size of a Red Bulborb.

Its behavior seems unfinished. When it spawns, it pops out from the

ground, without particle effects, and begins waddling about. When leaders or Pikmin get near, it becomes alerted, and runs to its spawn point, where it burrows itself (again, without particles). If it is left alone for a bit, it pops out and repeats, but if not, it will either stay under the ground, or occasionally pop its head out for a second. It's not known what triggers each of these behaviors. When it buries, its health is completely refilled.

crystal_frog is the internal name of the Calcified Crushblat, but this enemy is something else entirely. It's the Wollywog from the previous games, with a rock attached to its bottom. The texture used for crystal_maro_frog is the same as the Wollywog texture in Pikmin 2, but with the colors somewhat shifted. It also has the same eye texture as in Pikmin 2, and a new rock texture.

A Beady Long Legs...with a foot for a head. It has two textures, which are the same as the standard orange Pikmin 2 one, but one is tinted pink and the other blue. The screenshot shown here uses the original orange for the sake of clarity. damagumo, the old internal name for the Beady Long Legs, is now used for the Shaggy Long Legs. "iwa" means "rock", "dama" is ball, and "gumo" means spider.

The Male Sheargrub, but with a different look. It's fat, so its body looks circular. Its back is also only one solid color. The texture for it is the exact same as the Pikmin 2 one. "Buriko" means "sailfin sandfish egg", the internal name of the Male Sheargrub in Pikmin 2 is ujib, and the internal name of the used Male Sheargrub in this game is ujinko_b, so it looks like they wanted to take this enemy in a different direction. Its behavior is very similar to the classic Male Sheargrub, but it can't be defeated and is very fast. So fast, in fact, that it has a hard time getting near and biting on Pikmin. It causes no damage to leaders.

This enemy seems entirely new, but its texture is almost the same as the Ravenous Whiskerpillar's texture in Pikmin 2, just with the colors slightly altered. The model itself is quite a bit different though. It's slightly larger, has antennae where there used to be none, its eyes are a bit bigger, and its namesake whiskers are gone. Either the creature was meant to look mostly purple, or the model's texture mapping is not correct. The internal name for the Whiskerpillar in the previous game was imomushi, so it looks like this enemy was meant to be something different. Behavior-wise, it acts exactly the same as the kakureimo.\

It is supposed to be a Fake Candypop Bud. It has no complete animations, so if you throw any type of Pikmin in the Bud they'll just die.

This is actually a Gas pipe. It seemed like poison was going to be in Pikmin 3 too! As White Pikmin are only immune to the Gas.

Retrieved from "https://pikmin.fandom.com/wiki/Pikmin_3_Beta_Elements?oldid=126607"
Community content is available under CC-BY-SA unless otherwise noted.