Pikmin's Beta Version had many unused beta elements that never made it into the final game. This includes some beta maps, and other miscellaneous changes. They can be found in the game's disc and in some trailers. Click this link for more info: http://tcrf.net/Pikmin.

Half a dozen unused areas remain on the game disc. Some are test maps, while others were used in prerelease trailers. Only their models and collision data remain, so in order to access them in-game, they must replace an existing level. The objects, music and other properties will belong to the original level. You can check the gameplay of those maps in the right. There are 2 parts of the video.

Believed to be a prototype Impact Site, due to both being similar, right down to the paths the Pikmin take when carrying stuff to the Onions. The slopes have odd textures.

This level was used for the Model viewer (see below).

Also known as play3, this area resembles both the Impact Site and the Forest of Hope. It was probably used for an E3 conference.

This area appeared on an old commercial. It resembles the Distant Spring a bit, but with unused textures. There are no borders, so carelessness will lead to falling down the abyss.

Seems to be another test map, this one has slopes and test textures. Also, a Helicopter parking, how awesome is that?

Probably another test map, with other unused textures. There are placeholder textures, strange bottles, tin cans and some awesome realistic mountains on the level.

The classic test maps are even here, in Pikmin. But this one is pretty different, there are slopes of various degrees, some bridges, some holes, some ladders, some curves, and even a semi-puzzle inside it.

Similar to Play_4, this is one of the strangest levels. There are holes and a huge area to explore. Analyzing the name of Tuto2 and Tuto1, this probably was to be a 2 Player game level too.

Tuto2, according to the game files, would be the opening level for a 2-player game (also discovered in the game files). There is no way to open it yet. 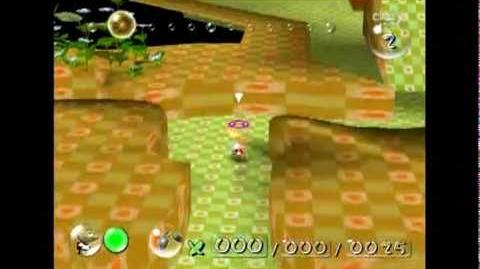 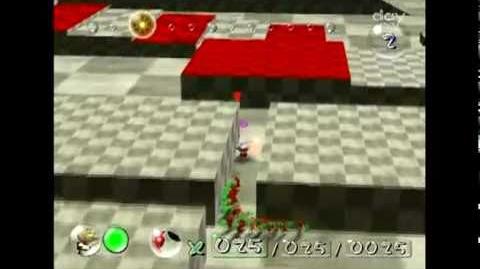 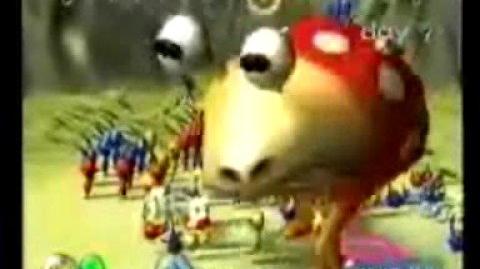 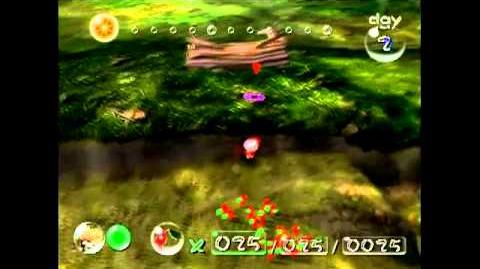 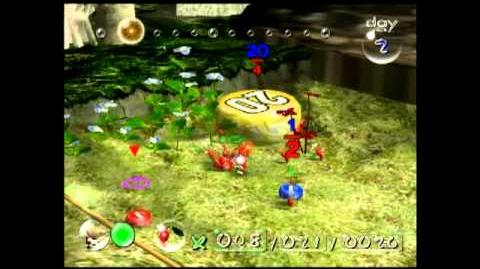 There are plenty of unused models in the game. There is also some models from Mario games, presuming that they might be Super Mario 128 Leftovers.

An early pellet model at the game files. There are duplicates for this model.

Kuribo is the Japanese name for Goomba, the Mario enemy. Strangely, this is the same model of Kug, an unused enemy in Super Mario Sunshine.

Yes, this model is very huge. The only way to see the model was by replacing the Space Background.

Both of these models are located in the same folder. Presumably, the key would be used to unlock the door.

There is an old marker (as the title says). This is obvious that was used in development, the X spot shows where thrown pikmin will land, the gray border is the whistling area, and the other circle is still unknown, probably the "lure" of Pikmin in ship parts. 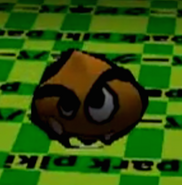 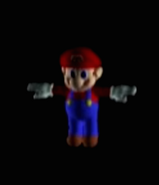 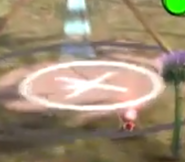 Only located in the Japanese version of Pikmin, there is a early demo movie inside the sound folder (SndData), technically, the final version is located at the movie folder (MovieData).

Some variants of the regular terrain textures exist in the game, but they are technically used - in the unused areas described above. Other than that, there are some truly unused graphics in the disc.

These are a few interesting textures that suggest that Yellow Pikmin weren't the only ones that could carry bomb-rocks, at one point. Pikmin 3 introduced this concept officially.

An interesting texture, the moon was probably used when it was sunset. This was probably cut because some levels are too dark.

I have finally recovered all 30 parts of my ship and succeeded in escaping this strange world! To think, all the times I almost gave up hope... On the now distant surface, the brave Pikmin that aided me in my perilous quest are running about as if I had never come. Will our paths ever cross again...?

At any rate, I can finally return to my home world. I feel relief, of course, but also a certain sadness. I can't exactly say... Perhaps, I am just thinking of the long journey through space that still lies before me. This time, I shall set my ship's navigation system so that I encounter no more meteors, and I shall enjoy a long relaxing sleep. I shan't forget you, Pikmin!

This log is never recorded because once the player gets all 30 ship parts, the game ends on the spot, and the voyage log can't be read after that; only if the save is reloaded before the final piece.

How do these Pikmin choose a route to return to their Onions? If an obstacle blocks their path, they just seem to carry their load in a tight circle... It is obvious their intelligence has limits. It seems I must order them to tear down the walls to open the way.

A similar message that talks about the Pikmin's paths is used instead.

Another unused message. No idea where it could've been used.

Hope has begun to well up within me for the Dolphin's repair and my own chances of a reunion with my dear family. Tomorrow I shall go forth with a new attitude and continue my exploration in a different region. I hope that Fortune will smile upon me...

This apparently shows when all parts in an area are gathered, but it seems that whenever a new area is unlocked, a discussion about the new area takes place.

Other than these, there are a few files in Japanese, that discuss some pretty standard stuff, that shouldn't warrant a voyage log to begin with.

There is also a 2nd page file for some of the entries. Likely, the translators were able to fit all the info in one page, and the 2nd one was left untranslated and unused.

Finally, some entries have a small function that checks the number of days. If it's just 1, it displays "day" (singular). If not, "days" (plural). Though in some of those cases, the check is unused, as some of the entries couldn't possibly happen on the first day.

"My long adventure has finally come to its conclusion. I must part with these Pikmin who have helped me in my need. At last comes the time when I depart to once again travel the depths of space."

Similarly to the unused voyage log entry, this message is never shown. Once the final piece is collected, Olimar comments about it (it's a piggy bank), and states that he must leave the planet. After that, the ending cutscenes roll and Olimar never monologs in-game again.

One of the monologs also has a plural/singular check. When Olimar checks the ship's status, it shows how many pieces have been gathered. However, there are 2 messages like this. One that is only said on the first day (and doesn't mention healing the suit), and another on the following days (and mentions the suit being healed). In the first day, when you collect the first piece, the day ends immediately. This means that the only way to view that "first day" message is when the ship has 0 parts. As such, the game could never write "part" in singular.

Finally, there are also some entries in Japanese, that talk about miscellaneous stuff.

A simple debug menu that tests some of the game's features. Each option has a value, that can be changed, and when the A button is pressed, a menu or screen appears. These are the available options:

This probably was used for testing at the developer progress. Of note is that the following two codes are for NTSC version 1.1. Enable Debug Info (Press D-Pad Up):

According to these videos on the right, there are a few unused animations for the Pikmin.

At 5:30 in the first video there seems to be an unused object of some sorts. It looks like a round stone with three stone pegs balancing it, and it has a hole on the front that looks similar to the Armored Cannon Beetle's windpipe. It has no animations seen and looks as if Pikmin might have needed to be thrown inside it for some reason. It's possible that it might have actually expelled something, like fire, or wind.

Hold the D-pad right while a new menu is being loaded (for instance, in the Nintendo logo), and this mode will load instead. Although, note that loading the model viewer at the Nintendo logo will make the animations play without sound.

Contained within the game files are Windows DLLs and executable files, which were used to launch Pikmin on Windows PCs using Nintendo's PCEMU emulator that shipped with GameCube software development kits. The game can still be run with the executable if PCEMU is installed.

This game has a lot of debugging text and unused content just outside of the camera's frame, in almost every screen.

There are other off-camera details, but these ones aren't exactly unused, just misplaced or weird.

In an interview with the developers of Pikmin from a 2001 exclusive Pikmin guidebook, Collen Reed, the main developer of Pikmin's engine, mentions a creature that was completely taken out of the game:

Miyamoto: "The enemy creatures aren't frightening, but they became frightening once the programmers created creatures that eat Pikmin."

Reed: "The most frightening one was creature that kept doing its own thing while keeping a Pikmin leg hanging out of the side of its mouth. (Laughs.) Of course, I removed it."

The page from the guide's Interview section where Miyamoto and Reed discuss a scrapped enemy in the bottom left corner of the page.

In the NTSC version, you cannot skip the ~20 second long sunset cutscenes, but you can in the PAL version.

In some test levels, there is an unused enemy called 'iwagen'. It appears to be a mossy rock shooting stones like the Armored Cannon Beetle. It has no health counter and invincible.

Changes that don't fit into any specific category.

The Beta stand can be seen in the first video while waiting at the title screen.

The Extraordinary Bolt as seen in the Creature Montage.

An image of a beta bridge.
Community content is available under CC-BY-SA unless otherwise noted.
Advertisement