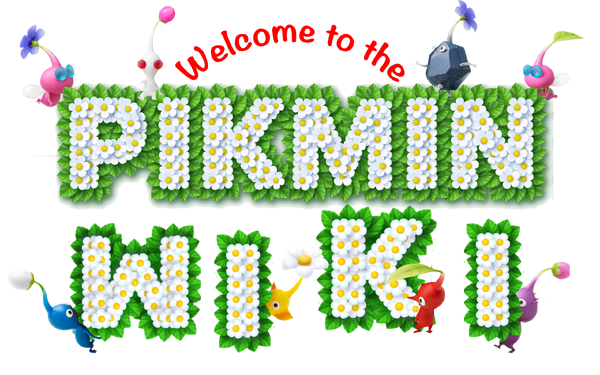 The wiki about the Pikmin series that anyone can edit! This wiki currently has 859 articles and is still growing! Do not be afraid chosen one, you are welcome to come hop in and edit! But please read our Policies page first!

Hey! Pikmin is a spin-off game of the Pikmin series, released on July 13, 2017, for the Nintendo 3DS. It does not appear to take place during the main series, or at least has no connections to the previous games. It introduces no new Pikmin, but you can find twenty Pikmin per level, normally in groups of four.

After making a delivery, Captain Olimar heads back home to his planet, Hocotate, in his brand new ship: the S.S. Dolphin II. As he tries to enter warp speed, something malfunctions within the spacecraft. Olimar soon found himself caught dead center within an asteroid field! He dodged left and right, but his engines take a hit and he loses control.

Captain Olimar then crash lands on a very familiar planet, finding out that his ship no longer has any Sparklium, its main fuel. The S.S Dolphin II tells Olimar that they need 30,000 Sparklium in order to successfully power up the ship, however their Sparklium Converter is missing as well. The ship then senses a signal coming from somewhere nearby.

They find a Red Pikmin on the way to where the signal is, which looks at them for a while, then runs. After following the direction it went, they find the Pikmin hiding in the weeds, where four are actually hiding. Soon after, the S.S Dolphin II tells Olimar that those yellow shiny seeds are actually Sparklium seeds.

Olimar, with the help of the Pikmin once more, must harvest and use 30,000 Sparklium Seeds and retrieve his missing ship part in order to return to his home planet. Read the full article here.

1/5
Community content is available under CC-BY-SA unless otherwise noted.
Advertisement