The Plasm Wraith (アメニュウドウ, Ame Nyūdou) is the final boss of Pikmin 3, and is responsible for capturing Captain Olimar. It is presumed to be the planet PNF-404 itself. It is a virtually featureless, vaguely-humanoid Waterwraith-like being made entirely out of a cellular protoplasmic mass, which allows it to split different parts of its body off to create other semi-independent entities. It is fought in the Formidable Oak.

As with all final bosses, the path leading up to it, and/or the boss fight itself, requires the knowledge and utilization of every single Pikmin type.

When Olimar first arrived at the Formidable Oak, he saw a gold, shiny substance at the top of the tower, and decided to investigate. Louie expressed discomfort and chose to stay behind, and let Olimar go on ahead without him.

At first, the creature was curious and playful towards Olimar and did no harm to him. However, when Olimar tried to leave, the creature became aggressive, triggering his suit's auto-sleep function and dragging him back to its cave. It became protective of Olimar to the point that it would attack anything that showed interest in him. The exact reason for this bizarre behavior remains unknown.

​Just like in the first Pikmin game, the level the Plasm Wraith is fought in, the Formidable Oak, is entirely devoted to its battle. When first spotted, the creature envelopes Olimar in order to protect him, but it is defeated with Pikmin. The players then use Pikmin to carry Olimar and escape down into the nearby cave. However, the being drops from the cave ceiling and shapeshifts into a massive Goolix-like creature called the Mysterious Life Form, which will chase the player down the chasm. The player must stay ahead of it while overcoming the various obstacles present within the chasm in order to safely escape. There are a few notes that the player should take at this point...

After the player successfully escapes the chasm, they will appear in an arena outside. After the Mysterious Life Form gets to the exit as well, it will revert to its original humanoid shape and inhale all of its scattered plasm, subsequently growing to an immense size. It will then inhale and secure Olimar inside its body, thus commencing the final battle.

Note: If Brittany and Olimar are in water, The Mysterious Life Form will follow your ‘active player’ (the Koppatite you are playing as).

When the Mysterious Life Form transforms into the Plasm Wraith and recaptures Olimar, proceed to throw Pikmin at its stomach. This will cause small bits of its plasmic exterior to fall off, making its health deplenish. However, Pikmin must then attack the puddles of plasm on the floor to destroy them, or the Wraith will simply reabsorb the puddles and regenerate. Although it is not necessary, you may take 20 of each Pikmin for the battle. Send the other two captains out of its reach, as this fight only requires one captain.

Be prepared to lose a lot of Pikmin during this phase of the battle. It will actively attack Pikmin, but mainly prefers to target the Captains and attack when they are close by skewering them with a rapid "needle-arm" attack. Rock Pikmin will merely be knocked down by this attack, but any other Pikmin will be skewered and eaten. You can separate the captains as a distraction, with one captain handling all the Pikmin. It is unwise to attack it head-on, as it will not be fazed by attacks, and can easily kill the Pikmin. Instead, throw just a few Pikmin at it, preferably its backside, until it tries to shake Pikmin off by twisting its body, then spinning around. This will cause additional plasm to fly off of its body. As it loses more and more plasm, it decreases in size, but it will frequently try to heal itself by reabsorbing any plasm left on the ground. Throw Pikmin at the plasm on the ground to minimize the amount of health that the Plasm Wraith can recover.

After a quarter of its health is depleted, the boss will attack by spewing large masses of plasm onto the arena, then spitting out a golden fractal-embroidered cube. The plasmic mass will form around this solid cube and form an Elemental Plasm. Each Elemental Plasm has a specific hazard associated with it. If the boss spits out a cube, quickly call all Pikmin away from it. It has many forms, each of which can only be killed with certain Pikmin types:

Destroying Elemental Plasms will leave behind a large amount of plasm that must also be destroyed. If they are left alive for longer than 20 seconds, the Plasm Wraith will reabsorb them to heal itself.

After it's been reduced to just a quarter of its health, it will create three Elemental Plasms at once. It can also become temporarily airborne, during which it can only be reached by Winged Pikmin. If it is hit with Winged Pikmin while flying, it may fall down, losing even more plasm as it hits the ground.

By the time its health meter has turned red, it will have become very small in stature, and will hardly be able to attack your Pikmin, instead choosing to run away. The speed at which it attacks and moves is greatly increased the lower its marginally-small health meter becomes. Once defeated, it expels a golden cube, which dissolves to reveal an unharmedOlimar inside, and the remaining plasm on the ground crawls away and retreats back into the cave.

Defeating the Plasm Wraith immediately triggers the end of the game.

"A mysterious life-form in the Formidable Oak, the final area of Pikmin 3. Formed from a gelatinous substance, it normally can't be damaged at all...but with Olimar newly rescued, maybe he holds the key. When it takes humanoid form, it unleashes some terrifying attacks. You'll need all your skills to take it down and finish the game!"

The Plasm Wraith and Olimar, notice how it seems to take care of him.

The Plasm Wraith when it first consumes Olimar.

The Mysterious Life Form about to consume Olimar.

The Plasm Wraith in the process of reabsorbing used plasm.

The Plasm Wraith watches as the S.S. Drake leaves the planet.

The Plasm Wraith about to use its stabbing attack.

An odd second enemy bubble found off the map in the Oak during the boss fight. It could be the Plasm Wraith from the ending cutscene? 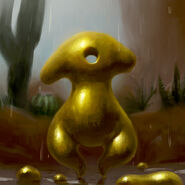