The Puffy Blowhog (フーセンドックリ, Fūsen Dokkuri) is an enemy found in every Pikmin game so far. It is the more recognized of the two airborne blowhog species, although it is much more rare than its cousin in Pikmin 2.

It is similar to the Withering Blowhog, but is larger, with purple/light blue stripes and intimidating, though harmless spines on its back. Its breath is notably stronger than that of the Withering Blowhog, but does not cause Pikmin flowers to wilt like in Pikmin, as it lacks the withering plant hormones which are characteristic of this beast's flying relative, the Withering Blowhog. Instead it blows Pikmin into hazards or enemies but it will not blow the captains if they have the Rush Boots. Purple Pikmin are also immune to the wind. This creature in Pikmin 2 can still take the flowers off of Pikmin by shaking them off. At maximum height, the Puffy Blowhog is exactly 12 centimeters off the ground.

In Pikmin they appear in The Distant Spring, and are only rarely seen within a few caves in Pikmin 2. This rare creature also appears in the multiplayer stage Carpet Plain.

They can deflower the Pikmin and blow them much farther in Pikmin than in Pikmin 2. Additionally, they are usually found near water and other enemies, making them more dangerous. It is also slightly larger than its Pikmin 2 appearance.

The Puffy Blowhog returns in Pikmin 3. In Pikmin 3, the Puffy Blowhog's skin looks much more balloon like. The purple stripes appear like actual balloons and are very slightly translucent and appear stretched by the air inside of it. The blue stripes are like decoration added afterwards, as they are opaque and shiny. Unlike previous Pikmin games, when it dies, it will deflate, allowing 2 Pikmin to carry the body. The body looks like a much smaller version of the blowhog that is flat.

"This is a large-bodied, flying organism, but it is possible that its interior is as empty as a blimp. If I can land a large number of Pikmin on it, they may be able to ground it. And then, once it's down, it will feel my sprouts' rage!"

"Instead of breathing fire, this species uses its hydrogen to float."

"This species of blowhog uses internally generated hydrogen to inflate a flotation bladder and hover above the ground. The creature's electrified pulse creates a sash of color that flows along the surface of its body, making it a particularly beautiful blowhog species. Precisely how it is able to internally stabilize its highly explosive hydrogen and simultaneously generate electricity remains a mystery. The puffy blowhog blows leaves and grass around to eat the insects underneath. It maintains midair buoyancy by using its fins and releasing air through blowholes. This enables it to float effortlessly, even in the breeze. In times of danger, the puffy blowhog can decompress its flotation bladder for a rapid escape from predators."

"The living dirigible that is the Puffy Blowhog can knock over an entire Pikmin army with a single blast, requiring you to call all of your Pikmin together before you can proceed. It can also blow the flowers right off Pikmin. Toss troopers up to the Blowhog's belly and have them knock it out of the sky."

"This flying creature attacks by blowing air out of its snout. These attacks alone won't damage your Pikmin, but they will scatter your squad. Winged Pikmin are exceptional arial combatants, but all Pikmin types can be helpful when battling a Puffy Blowhog.

Flank the creature to avoid its attacks, then throw your Pikmin onto its side. Whenever the Puffy Blowhog is wrestled to the ground, send your squad charging in to do maximum damage."

In this game, Puffy Blowhogs can be quite a challenge, if not prepared. When the Puffy Blowhog goes into its attacking animation, quickly go under it and throw Pikmin onto it quickly. Even if it is not about to blow, just keep throwing, and it will eventually be weighed down. It is recommended to take out neighboring enemies first, so they do not get in the way. Reds can make for a quick battle, if the Puffy Blowhog is over land.

In Pikmin 2, these enemies are much rarer, and they are much easier with the addition of Purple Pikmin. Now, instead of having to throw many pikmin onto it to weigh it down, a single Purple Pikmin can weigh it down. Either swarm it or pummel it with Purples, and it will be down easily.

In the newest game, Puffy Blowhogs are only found in a few locations, and are still easier than their counterparts from Pikmin. With the addition of Winged Pikmin, they can deal with Puffy Blowhogs over time easily, since they can fly back up to it and keep attacking. However, it is only advised to do this with large amounts of Winged Pikmin, or during Mission Mode. Hits from Rock Pikmin can easily take down the Puffy Blowhog in a matter of seconds. Otherwise, the traditional "weigh down" strategy also works, but is not as effective anymore, as it puffs up its body as a defense mechanism once weighed down. If Pikmin are not attacking it, it will not puff up, so call Pikmin back before before it puffs up. 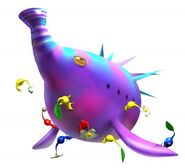 Artwork from Pikmin, showing the Puffy Blowhog being attacked by different-color Pikmin.

The Puffy Blowhog as it appears in a Beta Map.

A Puffy Blowhog in the Creature Montage. 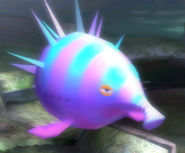 A Puffy Blowhog floating around in the Distant Spring.

A Puffy Blowhog. Here, it is escaping after being attacked by a group of Pikmin. 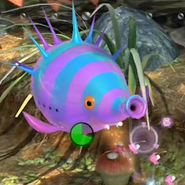 A Puffy Blowhog being attacked by Winged Pikmin in Pikmin 3.

A Red Pikmin picking up the deflated corpse of a Puffy Blowhog.

A Puffy Blowhog in the rain.

When battling a Puffy Blowhog in either Pikmin or Pikmin 2, there may be times when a Blowhog that is being pulled down by Pikmin will land on a border or ledge of some sort. The enemy will be unable to reach the programmed 'ground', and stay on the obstacle and repeat its struggling animation infinitely. In The Distant Spring, the stone pathways around the UV Lamp may cause this glitch to occur, and it can also happen on the walls of sublevels in various caves in Pikmin 2, wherever Puffy Blowhogs are found. When falling in Pikmin 3, this glitch is impossible because if it hits a wall it will slide down off the wall or use the wall as a booster to get back up. This can be annoying because if it keeps landing on the wall and getting back up it will be hard to ground. Yet this scenario rarely happens in Pikmin 3, only in Twilight Hollow of Mission Mode and Sandpit Kingdom of Bingo Battle.

Retrieved from "https://pikmin.fandom.com/wiki/Puffy_Blowhog?oldid=128333"
Community content is available under CC-BY-SA unless otherwise noted.