The Quaggled Mireclops is a boss in Pikmin 3, and is the fifth major boss encountered in Story Mode, found in the second half of the Garden of Hope. It resembles a massive chunk of land (complete with plant life growing on it) that is supported by three enormous hooved legs, making it a tripedal creature. It walks around much like creatures from the Arachnorb family. When first found, the boss' only vulnerable part—its plant-like bulb near its teapot-like mouth—is encased in a Mireclops Crystal, which must be broken by Rock Pikmin. When the boss stomps on the muddy terrain that makes up its entire arena, it leaves a depression that is filled with water, presenting the threat of drowning to any non-Blue Pikmin. Upon its defeat, it will relinquish the Wayward Moon.

"A gigantic creature that appears in Pikmin 3. It's so large that it has often been mistaken for a forest. It's pretty docile until its crystal head is attacked, at which point it goes on a rampage! It'll lose its balance if the hooves are attacked. Be careful, though - it likes to slurp up Pikmin with its tongue."

At first, this creature will be submerged underground with only the top of its body exposed, encased in crystal. It will not move until the crystal is damaged enough to release one of its eyes; at that point, it will rise out of the ground and begin stomping around. At this point, its large, fleshy "hooves" are its main weak point. Throw Pikmin at the hooves and they will attack them, causing them to turn red. When one becomes bright red, the colossal creature will collapse onto the ground and become stunned. During this time, the top of the creature will be accessable, so use your Rock Pikmin to finish breaking the crystal on top. It is recommended to swarm it with as many Rock Pikmin as possible before it has a chance to extend its tongue.

After it breaks, the beast's vulnerable bulb will be exposed. Continue the process of attacking the creature's hooves and then its bulb to defeat it; however, standing on top of the creature will cause it to retaliate by spinning its massive tongue in a circle to eat many Pikmin at once. It is recommended to use most of your Blue Pikmin combined with the Ultra Spicy Spray at this stage in the battle, since they cannot be drowned in the water, or Winged Pikmin to attack the bulb when it rises up off the muddy terrain it is fought in. As it loses health, it will begin to charge faster and more aggressively and will also slam its body into the ground, crushing and/or drowning any Pikmin underneath it. In addition, it will perform its tongue spin twice in a row, with the second spin rotating at a higher speed.

An effective strategy is to, after waking up the Mireclops, head near the entrance of the arena and split up the captains. Have one captain hold 10 Rock Pikmin and a large number of Red Pikmin, and give another a large number of Blue Pikmin. Have the captain with the Blue Pikmin work on stunning the creature, and once it's stunned, send in the captain with the rocks and reds. Break the crystal with the rocks and when its stunned for the rest of the battle, use reds on the bulb. When you see the base of the Mireclops start to rotate, throw a few extra Pikmin on the bulb and retreat, as they will get in extra damage while it attempts to lick up your Pikmin. Once it gets back up, have the red and rock captain retreat and repeat until it dies.

Warning: This strategy may be complex for some and should only be used by experienced players.

Winged Pikmin are especially useful for this boss. It is advised to bring in 50 Winged Pikmin and 30 Rock Pikmin. Once it has been awakened, use an Ultra-Spicy Spray and order the Pikmin to attack a foot as soon as it touches down. Proceed to the crystal and quickly mob it with Rock Pikmin before it uses its tongue attack. It should break, and then the next phase of the fight will begin.

Now have one captain go outside of the arena with the Rock Pikmin, as they are no longer needed for the fight. Again, use an Ultra-Spicy Spray (if you only had 1, be sure to save it for this segment of the fight) and attack a foot as soon as it touches down. Beware of the Mireclops' new attacks, where it rapidly moves across the arena. Once it comes down, throw a few Winged Pikmin onto the bulb. This will cause the boss to shake them off and trigger its tounge attack. During this time, run around the boss' body, throwing a few more Winged Pikmin onto it. After the tongue has made it about half way around its body, swarm all of your spiced-up Winged Pikmin at the bulb. Since the tongue will be preparing to go into its "retraction" animation, the boss will be unable to shake off Pikmin. If done right, the boss' health will immediately drain completely and it will be dead in a single attack. This tactic can be used to defeat the boss in under 1 minute.

The Quaggled Mireclops being scanned. Paludambule appears to be the French name of the creature. It also shows its bizarre tongue.

The last horrified stare as the Mireclops passes away. 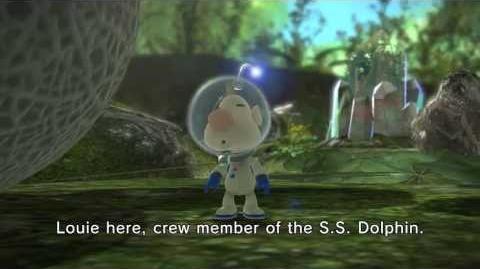