Raging Long Legs (ゾウノアシ) is a boss in Pikmin 2. It is similar to the Beady Long Legs, but has bigger, hairier feet, a much bigger body (to the point where any Pikmin can reach it at any time), is glossy black with purple veins, and moves more slowly. It makes the same noise, too. It is also much stronger, and so takes longer to kill. Unlike the Beady Long Legs, the beast shakes Pikmin off and starts stomping angrily if enough damage is dealt to it that it becomes agitated; this is more dangerous due to the size of its feet. The fact that it has a larger body means any kind of Pikmin can be thrown onto it without waiting and makes the battle easier. It dies in the same manner as the Beady Long Legs, ejecting its possessions from its body, crumbling into dust. If this creature does not have any treasure to drop, it will instead drop 30 Mitites, making for a quick way to flower Pikmin. It can regain health if left alone.

This rare boss is only seen on the last sublevel of the Hole of Heroes, the single sublevel of the Cavernous Abyss in Challenge Mode, and in the Angle Maze stage of 2-Player Mode if the stage is shaped with a large, circular center. In the Holes of Heroes, it is found with many Jellyfloats.

"Arachnorbs boast a wondrous biological composition, with a silicon-based exoskeleton and innards coated with malleable heavy metals. However, much about these creatures remains a mystery, as specimens regularly explode when they are dissected. These explosions produce scorching flames that completely melt all internal organs, leaving us with a disappointing lack of information on the inner workings of the species. We must await the development of new dissection processes and more specialized research before we can better understand this enigmatic creature. However, the following observation notes have been recorded: appears to be leveling terrain for some unknown purpose... Location of eyes and ears not readily apparent... Freezing a specimen may yield new research opportunities."

"Neither boiling nor baking can diminish this creature's overpowering musky scent. Only suitable for serving to unpleasant in-laws."

"Even though it's the largest spidery beast around and it's stomping feet are huge, you'll be able to beat Ranging long Legs with relative ease. Its body is large, low, and easy to hit. Center yourself beneath it, attack with with purple and be ready to pick up the pieces quickly after it shakes them off."

Attack it with a group of 10 to 15 Pikmin (20 is possible but a little bit risky). Purple Pikmin are the best for this, because of their high damage output. Defeat all Jellyfloats first before you fight it than lure it out the web with a Captain. Call your Pikmin and go under the Raging Long Legs and throw all your Pikmin on its large abdomen. An Ultra-Spicy Spray is very useful for this fight. When it begins to shake off your Pikmin, call them and throw them back on right after it is done shaking. It will begin rampaging, so throwing quickly is very helpful. Rinse and repeat. This is the fastest way to kill it because you damage it the whole time. You can also throw your Pikmin from a distance and when it begins to shake them off call them back. This is a safer way when you want to use a large group of Pikmin. With this method, it is best to wait for the Raging Long Legs to calm down before throwing any more Pikmin. It usually becomes agitated after the forth stomp after stopping while Pikmin are hitting it. So call your Pikmin back when it stomps the third time to prevent agitation. Using an Ultra-Bitter Spray does not help much, because its durability increases and will take only a little bit of damage over time even when coming with a big group of Pikmin. It's also very dangerous, because it goes into its rage mode immediately after it unfreezes. 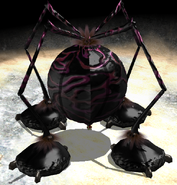 A high quality snapshot of the Raging Long Legs in the Hole of Heroes.

A Raging Long Legs in the Hole of Heroes.

A Raging Long Legs as it appears in Challenge Mode.

Add a photo to this gallery

Retrieved from "https://pikmin.fandom.com/wiki/Raging_Long_Legs?oldid=130235"
Community content is available under CC-BY-SA unless otherwise noted.